Love oatmeal but want to switch it up? This pumpkin buckwheat porridge power bowl is low in fat, high in fiber and makes for a hearty breakfast that’s full of fall flavors. Vegan and gluten-free.

I recently went through our pantry and found that I had stock-piled a ton of bulk bin items, one of which was buckwheat groats. I know I’m not the only bulk hoarder out there, but I still think my collection is a bit ridiculous, so I’m on a mission to use them all up before buying any more. Enter this buckwheat porridge bowl with pumpkin.

Why You Should Sprout Your Buckwheat

Not really sure what I was going to do with the buckwheat, I decided to soak and sprout them. I’ve only tried sprouting a few times, but it really isn’t hard and it was so fun to watch the little sprouts form. Maybe I’m just weird but I love watching stuff grow, sprout, etc. It’s like magic!

You do have to have a little patience because it does take a couple of days to get your sprouts. I’m usually the most impatient person I know, but the sprouting worked to my advantage because by the time the groats had finished soaking/sprouting I had come up with a recipe idea.

Sprouting your buckwheat has many benefits, including:

You can read more about the benefits of sprouting here. And if you want to sprout yours, here’s a great guide I found.

That said, if you don’t have the time for sprouting, just be sure you soak and rinse the buckwheat groats as it makes them easier to digest and the nutrients more readily absorbed in your body. After soaking, the groats may become a little slimy, that’s perfectly normal, just rinse them and use them according to the recipe.

Is Buckwheat Healthier Than Oatmeal?

As well all know, I am a huge oatmeal lover. From overnight oats to baked oatmeal I’ve shared so many healthy oatmeal recipes here on EBF! But I have to say… Buckwheat contains more fiber, potassium, vitamins B2 and B3 and less saturated fat than oatmeal (source). Does that mean oatmeal isn’t healthy? Of course not! I say it’s a good idea to add some variety and eat more Buckwheat! It’s super easy to cook with and can be used in a variety of different ways, just like oatmeal.

How to Assemble a Power Bowl

Sprout Buckwheat – If you want sprouted buckwheat, make sure you do this step ahead of time! Follow the steps above or check out this helpful resource on how to sprout buckwheat.

Cook groats – Place sprouted (or soaked and rinsed) buckwheat groats in a pot with enough almond milk to cover the groats. Add banana slices and cook over medium heat until the buckwheat has absorbed the liquid and becomes soft. The timing will differ depending on how long you soaked the groats. My groats cooked up in about 7 minutes or so. If ever the buckwheat is getting dry, at a bit more almond milk.

Add mix-ins – Stir in canned pumpkin, vanilla, pumpkin pie spice and cinnamon. Cook until the texture is to your liking.

Serve – Divide into two bowls, sprinkle on toppings and enjoy!

This recipe makes enough for two bowls of buckwheat porridge. If you want to save one for later, I recommend storing it in an airtight container in the fridge for up to 3 days. Store the toppings separately so they do not become soggy.

I do not recommend freezing this power bowl.

5 from 1 vote
Love oatmeal but want to switch it up? This pumpkin buckwheat porridge power bowl is low in fat, high in fiber and makes for a hearty breakfast that's full of fall flavors. Vegan and gluten-free. 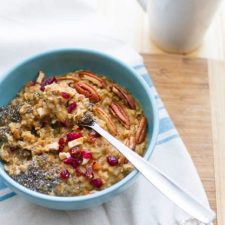 If you’re new to buckwheat groats, look for the raw version, not the toasted version which is often called kasha. You’ll likely find it at your local health food store in the bulk bin section or on the grain aisle.