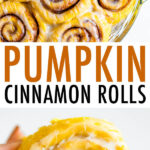 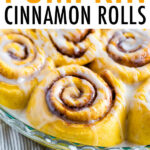 These ooey gooey vegan pumpkin cinnamon rolls are a delicious treat to make for breakfast or brunch. They’re made with bread flour, which gives them the perfect fluffy texture.

Have you ever made homemade cinnamon rolls? They were Isaac’s grandma’s specialty and although I wasn’t lucky enough to learn from her, I figured I would take a stab at a festive version for the holidays. Luckily, a friend of mine, who went to culinary school and is now a pastry chef, actually came over the first time I attempted to create this recipe and helped me a ton.

The first batch was good, but a little dry and the rolls weren’t super fluffy, so I tweaked the recipe a bit and the result is the recipe I’m sharing today.

I have to say, these pumpkin cinnamon rolls are the real deal! They’re vegan, but still quite indulgent for an EBF breakfast recipe. I promise they’re worth it… Want to skip the pumpkin? I also have a vegan cinnamon roll recipe if you prefer! Don’t need a vegan option, try my traditional fluffy cinnamon rolls!

To keep this recipe vegan we’re using coconut oil instead of butter and almond milk instead of regular milk. These swaps are so easy and don’t change the flavor of the recipe at all. These cinnamon rolls taste just as a good as cinnamon rolls made with dairy — trust me!

How to Make Homemade Cinnamon Rolls

First thing first, cinnamon rolls do take a little bit of attention and time, so make sure you have enough time set aside for this process!

We’re going to start by making the pumpkin dough. Stir the yeast into 1/3 cup of warm water until dissolved. Let this mixture set for about 10 minutes. In the meantime, combine the flour, sugar and salt in the bowl of your stand mixer and combine using the dough hook on low speed for about 1 minute. In a separate bowl, mix together your wet ingredients – the pumpkin puree, coconut oil and warm water.

Mix at medium-low speed for five minutes or until the dough is smooth. Increase the speed to medium and mix for two minutes. This is technically the “kneading” process, but you’re using the mixer to do the work rather than doing it by hand. You’ll know the dough is done kneading and ready when it makes a slapping sound as it hits the side of the bowl.

Place the dough ball in an oiled bowl, cover and let rise for one hour or until the dough has doubled in size.

While your dough rises, make the cinnamon sugar filling by stirring together the brown sugar, cinnamon and coconut oil in a bowl. Prepare your baking dish by greasing it with coconut oil.

After your dough has doubled in size, it’s time to roll it out! Sprinkle extra flour on your surface and rolling pin and roll the dough into a rectangle that’s about 12 inches wide by 14 inches long.

Sprinkle the cinnamon sugar mixture over dough and smear it all over the surface with your fingers.

Starting at the top, roll the dough toward you into a large log, moving back and forth down the line of the dough, always rolling toward you. Roll it tightly as you go so the rolls will be nice and neat. When it’s all rolled up, pinch the seam closed and turn the roll over so the seam is facing down. Cut the “log” crosswise into 12 one-inch-thick pieces and place on prepared baking sheet or pie pan. Cover and let rise in a warm place for 45 minutes or until doubled in size.

Once doubled in size, bake the rolls for 18-20 minutes or until golden brown and cooked through. Make your frosting in a small bowl and spread over the warm rolls. Enjoy!

That was easy enough wasn’t it?? I feel like people are intimidated by homemade cinnamon rolls for some reason (I was!), but you really shouldn’t be! I feel so proud of myself every time I make homemade rolls and can see these becoming a traditional holiday breakfast in our home for years to come!

If you make these pumpkin cinnamon rolls, please be sure to leave a comment and star rating below letting me know how they turned out. Your feedback is so helpful for the EBF team and other EBF readers.

4 from 16 votes
These ooey gooey vegan pumpkin cinnamon rolls are a delicious treat to make for breakfast or brunch. They’re made with bread flour, which gives them the perfect fluffy texture. 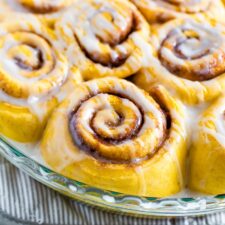