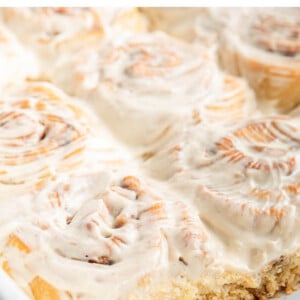 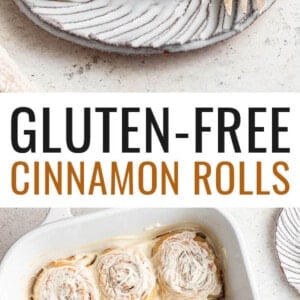 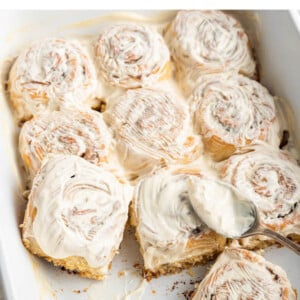 Make gluten-free cinnamon rolls with this simple recipe. They’re sweet, soft and come together quickly. No stand mixer required! They’re the perfect addition to a holiday or weekend brunch.

I had never had or made gluten-free cinnamon rolls before so I was pleasantly surprised at how these turned out! They’re delicious and even without the gluten they’re still soft, fluffy and loaded with cinnamon-sugar goodness. And the best part is that you don’t need a stand mixer to make this recipe! The gluten-free dough is much more delicate and soft so you just have to mix the dough by hand, let it rise and bake!

Best Gluten-Free Flour to Use

I haven’t tested this recipe with any other flour besides Bob’s Red Mill and different flour mixes might change the final texture/consistency of the dough, but here are some other flours that should work well in this recipe: Cup 4 Cup gluten free flour, King Arthur gluten free flour and Pillsbury Gluten Free All Purpose Flour.

How to Make Gluten-Free Cinnamon Rolls

Combine yeast & milk: Stir yeast and 1 Tablespoon of sugar into warm milk until dissolved. Let the mixture set until you see bubbles, 5-8 minutes.

Make dough: By hand, whisk together eggs, melted butter and remaining sugar in a large mixing bowl. Pour in the yeast mixture and whisk to combine. In a medium bowl, combine flour, salt and baking powder. Add the dry ingredients to wet ingredients and stir until a nice dough forms. The dough should be soft, but not too sticky.

Let dough rise: Cover the bowl with plastic wrap or a warm towel and set in a warm spot in the kitchen. Let the dough rise for 1-2 hours, or until doubled in volume. Time will depend on how warm your house is.

Make filling & prepare pan: While dough is rising you can make your cinnamon sugar filling. Stir together brown sugar and cinnamon in a small bowl. Then, grease a 13 x 9-inch baking dish or a round 9.5-inch pan with butter.

Roll out dough: Once the dough has doubled in size, roll out a large sheet of parchment paper and spray with nonstick cooking spray. Lightly oil your hands and spread the dough onto the parchment paper. With a rolling pin roll dough into roughly a 14 x 10-inch rectangle. Don’t press the dough too thin!

Spread cinnamon sugar filling: Spread softened butter on the dough with your fingers or a knife and sprinkle the cinnamon sugar mixture onto the butter. Starting at the top, roll the dough toward you into a large log, using the parchment paper to help roll, moving back and forth down the line of dough (in a “typewriter” motion) and always rolling toward you. Roll it tightly as you go so the rolls will be nice and neat.

Cut rolls: When it’s all rolled, pinch the seam closed and cut roll crosswise into 12 1-inch-thick pieces using a sharp knife (cut down in one motion vs sawing the dough). Wipe off the knife in between each cut to prevent the dough from sticking.

Let rolls rise: Place rolls on a prepared baking pan. Cover, and place in a warm place again for 45-60 minutes, until they rise and puff up.

Bake: Preheat oven to 350°F. Bake cinnamon rolls for 16-20 minutes, or until golden brown on top, rotating the pan halfway through. Do not over-bake!

Make frosting: While cinnamon rolls are cooling, make cream cheese frosting by adding cream cheese, greek yogurt, maple syrup and vanilla to a large mixing bowl. Using a hand mixer on medium speed, whip all the ingredients together until smooth and fluffy, scraping down the sides as needed. Alternatively, you can use a stand mixer.

What to Serve With Gluten-Free Cinnamon Rolls

These gluten-free cinnamon rolls would be the perfect addition for Christmas morning or Easter brunch. Here’s what I would serve them with:

Make sure the cinnamon rolls are cooled completely and then store in an airtight sealed container for 2-3 days in the refrigerator. Reheat leftovers in the oven, toaster oven or in the microwave for 30-40 seconds.

You can also store these cinnamon rolls in the freezer for 1-2 months. Make sure they are stored in a freezer-safe container and covered tightly. I’ve found it’s best to freeze them without the frosting and add that once you’ve reheated them. When ready to enjoy, thaw the cinnamon rolls and heat in the microwave or toaster oven until warm.

Why did my gluten-free cinnamon rolls turn out dry?

There are a few reasons that your cinnamon rolls might have turned out dry. One possibility is that you used too little liquid in your dough or that the rolls got overcooked causing the moisture to evaporate. It could also be the type of flour you used. If you use gluten-free flour without a type of binding agent you may end up with dry or crumbly cinnamon rolls.

How can I make my dough rise faster?

First, make sure you’re letting your dough rise in a warm location in your house. But if you’re in a rush and want your dough to rise faster there are a few things you can do to try and speed up the process. If you have a bread-proofing option on your oven you can turn that on and place your dough in the oven covered. Another option is to wet a kitchen towel with hot water, ring it out and then place it over the plastic wrap. This will add more warmth to the dough and help it to rise faster.

Why did my rolls not rise?

There are many reasons why your rolls might not have risen. Your yeast could be older, the milk could have been too hot, killing off the yeast or it might not have been warm enough, causing the yeast to not activate. Also, if your house is cooler, the rolls might need more time to rise. Make sure you’re letting the cinnamon rolls rise in a warm place.

Can I use a different frosting?

Yes, totally! I like using my healthy cream cheese frosting on these rolls, but feel free to change up the glaze/frosting if you prefer! I also like making a glaze by whisking together 1 cup of powdered sugar with 2 Tablespoons of almond milk.

How can I make these vegan?

Can I use instant yeast for this recipe?

Instant yeast should work just fine in this recipe, but I haven’t tested it. It won’t need to be dissolved in the warm milk (or “proofed”) and can be mixed directly into your dry ingredients. That said, I prefer to activate my yeast first to make sure it’s good and not old, which could affect the rolls rising.

Be sure to check out all the breakfast recipes as well as all the gluten-free recipes on EBF!

5 from 4 votes
Make gluten-free cinnamon rolls with this simple recipe. They’re sweet, soft and come together quickly. No stand mixer required! They're the perfect addition to a holiday or weekend brunch. 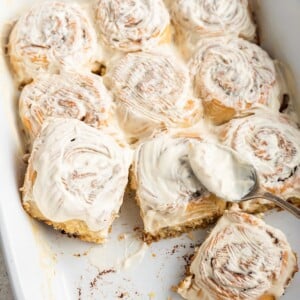