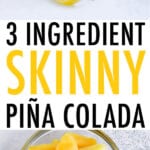 This Skinny Piña Colada recipe is made with frozen pineapple, coconut water and coconut rum. Serve frozen or on the rocks for an even lighter version.

During our Grand Cayman babymoon last month I drank quite a few (virgin) piña coladas and was quickly reminded how delicious they are. The combo of creamy coconut with pineapple is hard to beat… especially when you’re sitting on a beach with your toes in the sand.

That said, piña coladas can be pretty high in calories (usually over 500 cals a pop) and the store-bought mixes are loaded with added sugar, artificial flavors and preservatives.

Knowing all this, I decided to create a skinny piña colada recipe made with frozen pineapple chunks and coconut water. With a little experimenting I came up with two versions — one that you can serve over ice (on the rocks) and another that is frozen like a traditional piña colada.

Coconut Water Instead of Coconut Cream

I’m a big fan of using coconut water as a base for cocktails because it’s refreshing, hydrating and has electrolytes, which can help prevent a hangover. It’s great as a sub for coconut cream in this skinny piña colada recipe because you’re still getting that coconut flavor and a little natural sweetness without a ton of extra calories.

How to Make a Skinny Piña Colada

For this recipe I’m sharing two different options based on how you like to serve your piña coladas. Both variations make 2 servings.

If you’re looking to keep the calories low and don’t mind drinking a piña colada on the rocks, this option is for you! Just blend the frozen pineapple with the coconut water and coconut rum and serve the mixture over ice with a splash of sparkling water for a little fizz.

If you’re pregnant or just don’t want to have alcohol for whatever reason, you can easily make this a mocktail just by leaving out the rum. I made a non-alcoholic version the other week with just the frozen pineapple and coconut water. I served it over ice and it was just as delicious and refreshing!

4 from 17 votes
This Skinny Piña Colada recipe with real pineapple, coconut water and coconut rum is made with only four ingredients. Serve frozen or on the rocks for a lighter version of this tropical cocktail.