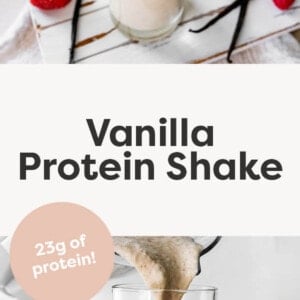 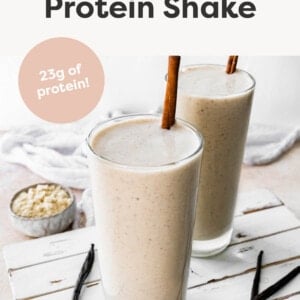 This vanilla protein shake is made with simple, natural ingredients and packed with protein. It’s perfect as a post-workout snack or a filling breakfast on the go!

Protein shakes are all the rage right now and for good reason! They make for an energizing breakfast and double as an amazing post-workout snack that helps refuel your body and repair fatigued muscles.

Over the years I’ve tried a ton of different protein shake flavors, but sometimes I’m craving a true classic – vanilla!

Some people might think that vanilla is boring, but trust me! This vanilla protein shake has a ton of vanilla flavor (from 3 sources!!) and it’s remarkably creamy.

Often times when we think of a protein shake we think about putting some protein powder and water into a blender bottle and shaking it up. I’ve honestly ever been a big fan of that sort of protein shake so I started making blended shakes… that actually taste good.

Of course, there is an extra step because you do have to break out your blender, but trust me it’s worth it.

Here’s What You Need

The best part about the protein shake? It’s made with 5 simple ingredients!

How to Make a Protein Shake Without Banana

Frozen bananas give shakes and smoothies that thick and creamy texture – similar to a shake you’d get from a smoothie shop. They also add a bit of sweetness, as well as, extra nutrients like potassium. That said, I know that some people simply don’t like bananas, need a low-sugar option and/or are allergic so I have some options for you to make this shake banana free:

There are some other frozen fruit and veggie substitutes for banana in protein shakes, like frozen berries, frozen mango or even avocado, but I’m not recommending these here because they will likely overpower the vanilla flavor we’re going for with this protein shake. That said, if you don’t mind the extra flavor, feel free to try these!

How to Scrape Seeds From a Vanilla Bean

5 from 12 votes
This vanilla protein shake is made with simple, natural ingredients and packed with protein. It's perfect as a post-workout snack or a filling breakfast on the go! 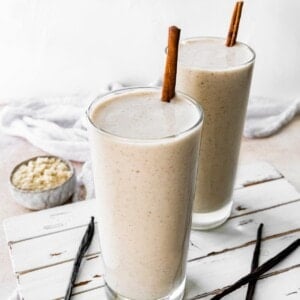