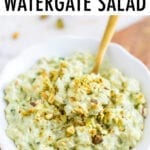 Watergate salad was one of my favorite things to eat growing up. My mom would make it every year for Easter and for summer cookouts.

If you didn’t grow up in the south you might be wondering what the heck watergate salad is, so let me fill you in real fast.

What is Watergate Salad?

This “salad” goes by a lot of names… I’ve always known it as Watergate Salad but apparently, it’s also known as Pistachio Delight, Shut The Gate Salad, Green Goop, Green Fluff or Green Stuff. Lots of official names. 😉 Traditionally it’s made from pistachio pudding mix, canned pineapple, whipped cream, crushed pecans and marshmallows. This recipe originated in the mid-1970s when instant gelatin was a new invention.

How is This a Salad?

I don’t know if this is a southern thing or just old school, but we had so many dessert salads growing up! My mom always made watergate salad and my grandma would make something called strawberry pretzel salad which has a pretzel and butter crust, a layer of whipped cream and cream cheese, all topped with strawberry jello.

And apparently, there is a “salad” called Candy Bar Salad with apples, whipped cream and snickers (so delicious but…?!) Need a walk down memory lane? Check out this round-up! LOL! You can also read some really interesting information on the history of Jell-O salads here.

The sugar-free pistachio pudding mix has aspartame and food dyes while Cool Whip has corn syrup as the first ingredient and hydrogenated vegetable oil as the third. No thanks! Here’s how I made this version healthier:

Here’s What You Need

How to Make Healthy Watergate Salad

It’s super simple to put together this recipe! Start by adding your vanilla Greek yogurt, almond extract and spinach to a blender and blend until the spinach is completely chopped up and the mixture is green.

Next, take out a large bowl and add the drained pineapple, coconut whipped topping, pistachios and granola. Pour the green Greek yogurt mixture over top of the ingredients and use a spatula to gently combine the ingredients. Add in the chopped dates if you’re using them.

Place the bowl in the fridge for 2-3 hours to chill before serving. Enjoy!

If you’re like me and grew up with this salad, I hope you like this healthier version. I can’t wait to hear what you think!

You can keep leftovers covered in the fridge for 3-4 days.

It’s a great make-ahead dish to serve at parties! Just follow the recipe, store it in your fridge, and take it out when you’re ready to serve.

Be sure to check out all of my dessert recipes here on EBF!