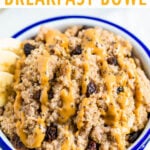 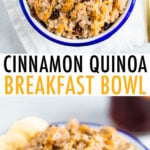 Have quinoa for breakfast with this easy cinnamon quinoa breakfast bowl. It’s vegan, gluten-free and the quinoa packs in a good amount of protein.

I love adding quinoa to savory dishes (this Greek quinoa salad is one of my faves), but lately I’ve been experimenting with having it for breakfast as well. In the past I’ve made a quinoa parfait and this fruity quinoa, but more recently I’ve been trying my hand at making quinoa as a hot breakfast option to replace my go-to bowl of oatmeal. 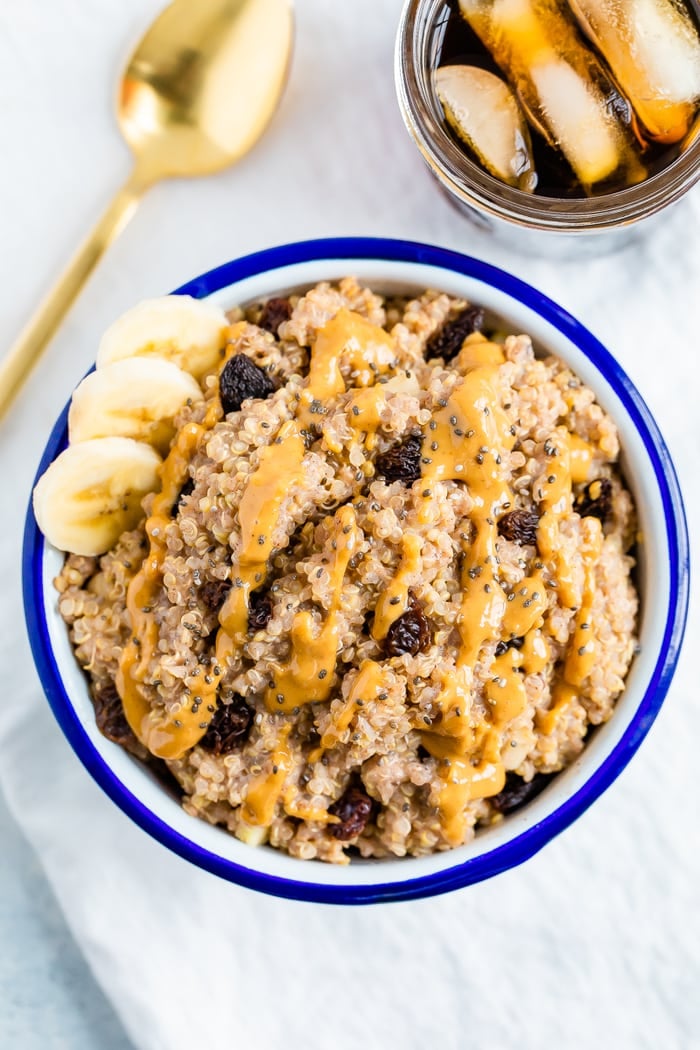 And this quinoa breakfast recipe is the perfect way to switch up your normal routine of having oatmeal, overnight oats or cold cereal for breakfast and gives you an added boost of protein to get through your morning! I hope you love this breakfast recipe as much as I do. 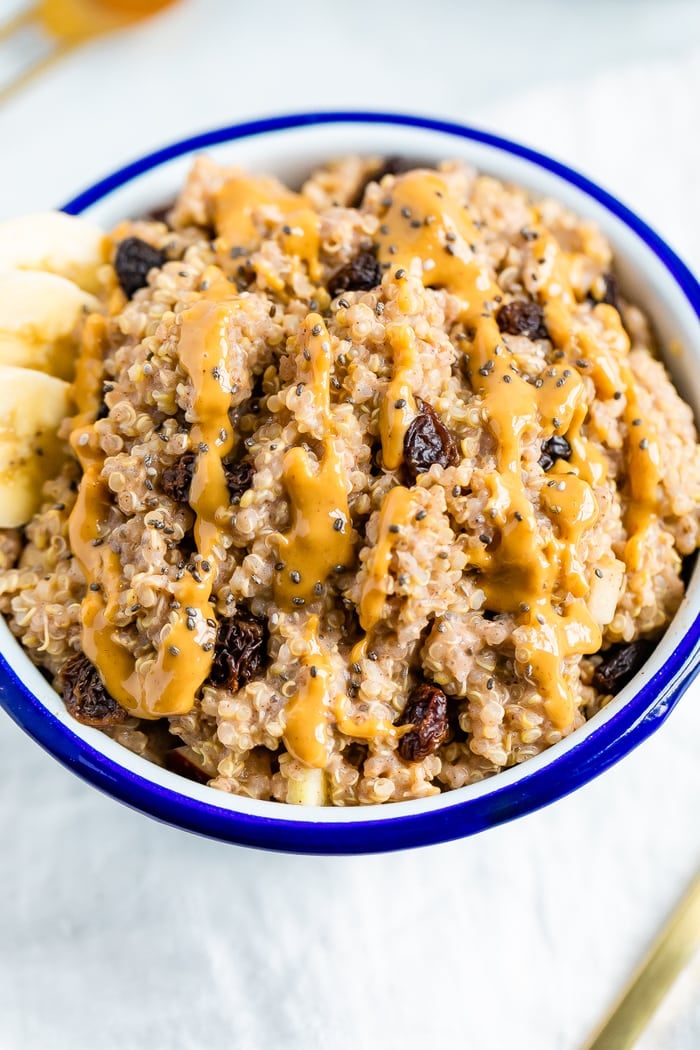 Is Quinoa Better Than Oatmeal?

If you’ve been reading EBF for a while, you already know that quinoa is one of my favorite grains (even though it’s actually a seed, I think of it as a grain). Not only is it high in protein, but the protein that it supplies is complete, meaning it includes all nine essential amino acids. Plus, it’s gluten free, which is perfect for those avoiding wheat and gluten.

I wouldn’t necessarily say it’s “better” than oatmeal because I think both grains are great! If I *had* to tell you what to eat, I’d tell you to eat a healthy mix of both. 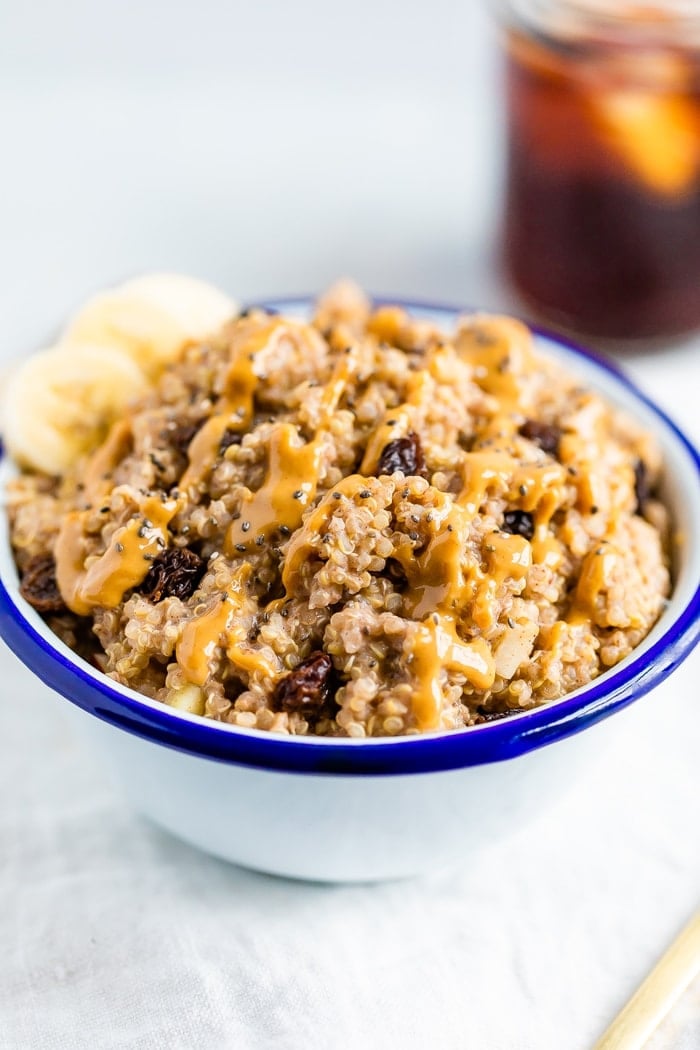 Ingredients in This Quinoa Breakfast Bowl 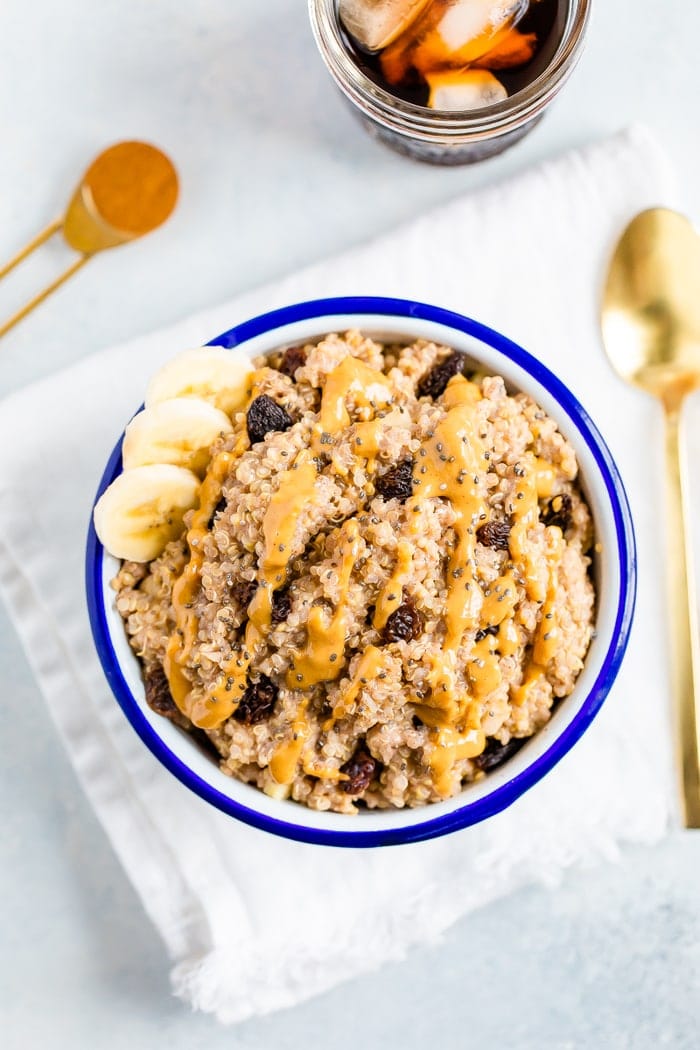 How to Make a Healthy Quinoa Breakfast

First things first, always make sure you rinse your quinoa before cooking. Most store-bought quinoa will have a coating that needs to be rinsed off… or you’ll be left with a bitter breakfast. No thanks!

Place your milk and quinoa in a small saucepan and bring to a boil. Add in the cinnamon and vanilla, stir to combine. Reduce to a simmer and cook for 15 minutes or until all liquid is absorbed. Don’t set it and forget it! I’ve found, this dish has the tendency to boil over so keep your eye on the pot and stir often.

When all of the liquid is absorbed, place a portion of the cooked quinoa into a bowl, drizzle with maple syrup and top with chia seeds, raisins and nut butter. Feel free to customize the toppings! This breakfast bowl would also be delicious with fresh fruit, hemp seeds, shredded coconut, toasted pecans… the options are endless.

If you make this warm cinnamon quinoa breakfast, please be sure to leave a comment and star rating below. Your feedback is super helpful for the EBF team and other readers who are thinking about making the recipe.

Have quinoa for breakfast with this easy cinnamon quinoa breakfast bowl. It’s vegan, gluten-free and the quinoa packs in a good amount of protein. 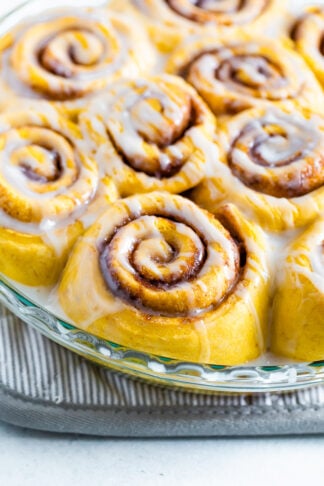 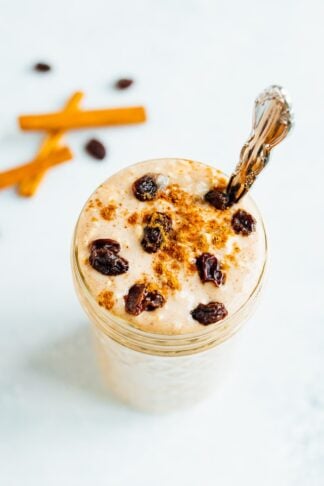 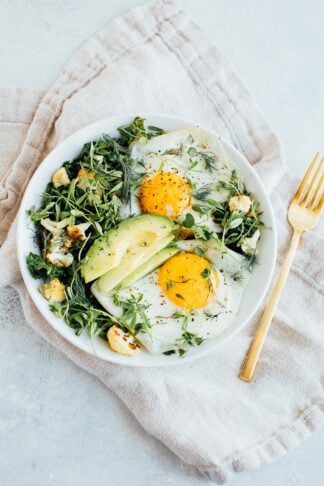 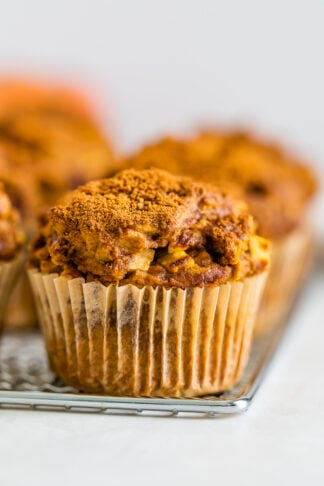