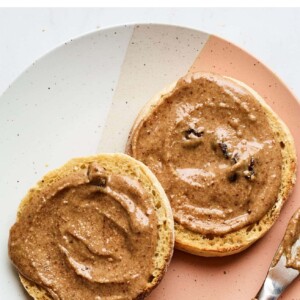 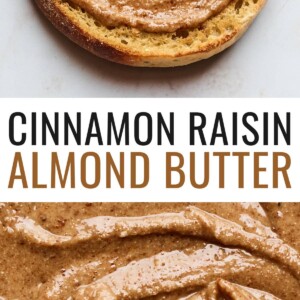 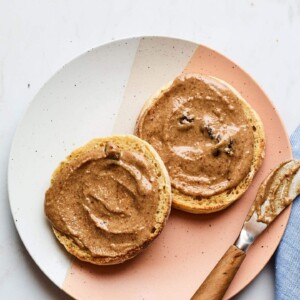 This homemade almond butter is studded with raisins and loaded with cinnamon goodness. It’s smooth, creamy and absolutely delicious! Spread it on apples or toast, mix it into oatmeal or enjoy by the spoonful!

Everyone knows that I’m a huge nut butter fan, but what you might not know is that one of my favorite varieties is Peanut Butter and Co’s Cinnamon Raisin Swirl. It makes sense considering Cinnamon Toast Crunch and Cinnamon Life were my favorite cereals growing up, cinnamon raisin bread has always been my number one bread choice, oatmeal raisin cookies are my fave and I eat raisins plain, by the handful. Basically I love cinnamon and raisins and had to recreate one of my favorite flavor combos as a nut butter!

Start by roasting the almonds. Spread the almonds on a 9×13 baking sheet and bake at 350ºF for 10-12 minutes. The almonds should be fragrant and golden brown in color. Let cool for about 20 minutes.

Place the roasted almonds in a food processor and process until nut butter starts to form. Be patient! The nuts will grind into a powder first and will eventually turn into nut butter. This process could take 15-25 minutes depending on your food processor. Add in the cinnamon, vanilla, salt and coconut oil (if using) and process again until combined. Add the raisins and pulse a few times to break the raisins up and mix them in!

Roast your almonds before blending – this brings out the flavor and helps them break down easier when you’re processing them!

Not creamy enough? Add in a little bit of coconut oil at a time until the desired creaminess is reached.

How to Use Cinnamon Raisin Almond Butter

Store your homemade almond butter in an airtight container in the refrigerator for up to two weeks. I like using mason jars or Weck jars.

5 from 2 votes
Homemade almond butter with cinnamon, vanilla and raisins. It’s just as delicious as it sounds! 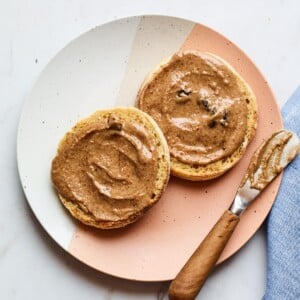