How to Cook Quinoa 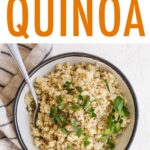 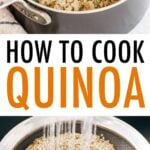 My go-to method for cooking quinoa so it’s perfectly cooked and fluffy. Use this quinoa in place of rice, for salads or as an easy side!

Have you seen the Progressive commercial where they’re having people try to pronounce quinoa?! I won’t lie… I laugh every time I see it.

Spoiler alert: you pronounce it keen-wah!

I am a quinoa lover and have been for years. I love making it to use in salads, soups and casseroles. It’s such a versatile little seed. Yes, it’s a seed. I know it seems like a grain, but it’s actually a pseudocereal.

If you’re new to quinoa, let’s start with the basics. Like I mentioned above, quinoa is technically a seed, but it is prepared similarly to grains like rice and barley.

It is a staple in South American cuisine and has gained popularity in North America over the years. In terms of taste, quinoa has a mild, nutty, earthy taste similar to brown rice.

Why is Quinoa So Great?

Quinoa is often considered a superfood and for good reason. Here’s why:

Learn more about the health benefits of quinoa here.

Which is Healthier: Quinoa vs. Rice

Often times you’ll see quinoa used as a rice substitute so you may be wondering if quinoa is healthier than rice.

It is! Overall, quinoa is a healthier choice than rice, especially white rice which is processed and not considered a whole grain.

While the calories are similar, around 200 per cup for quinoa and rice, 1 cup of quinoa has double the amount of protein and fiber than 1 cup of white rice.

When comparing quinoa to brown rice, the two are more comparable because brown rice is a whole grain and still contains some of the powerful nutrients that are lost in the processing of white rice.

Quinoa and brown rice have similar calories, fiber and micronutrients per serving, but quinoa does still have higher amounts of protein and less carbs! So overall, I’d say quinoa is healthier than rice.

There was probably a period of time where you could only buy quinoa at health food stores. Not anymore! Quinoa is at most major grocery stores! You can find it in the natural food section or by the other grains.

They’re all cooked the same way and nutritionally they’re very similar. Red quinoa does tend to be higher in antioxidants and sprouted quinoa has less phytic acid, which makes it easier for your body to absorb the nutrients.

I’ve personally tried them all, but tend to use regular white quinoa most often because it’s the least expensive and easy to find. It also has the mildest flavor and is fluffier than the colored varieties.

Red and black quinoa are a bit chewier, which works well in certain dishes where you want the quinoa to hold its shape, like quinoa salads. It’s also fun to use the red and black varieties when you want to add a pop of color to a dish.

My favorite brand of quinoa is Ancient Harvest, mostly because their quinoa comes pre-rinsed, which is a time saver. I’ve used this brand for years!

Do You Have to Rinse Quinoa?

After research and making quinoa with and without rinsing, I’ve decided that rinsing is entirely up to you!

The purpose of rinsing the quinoa is to remove its natural coating, called saponin, which can make your cooked quinoa taste bitter or soapy.

That said, skipping the rinsing the process won’t hurt you and can definitely save time and annoyance, especially if you don’t have a fine mesh strainer. Just know that unrinsed quinoa will likely result in quinoa with a more earthy, slightly bitter flavor.

The rinsing process really isn’t that bad. Just grab a fine mesh strainer, place the dry quinoa in and rinse until the water runs clear. Drain the quinoa and then add it to your pot for cooking.

How to Make Quinoa Taste Better

I’ll be the first to admit that I don’t usually cook quinoa to serve up on its own because it doesn’t taste like much. I use it the same way I use rice… as a base for a flavorful dish that I’m putting on top or incorporated into a recipe where I’m adding more flavor and seasoning along with the cooked quinoa.

For this reason, I usually cook my quinoa with water and forego extra seasonings because I know I’ll be adding more flavor when using the quinoa for my meal.

That said, if you want to serve cooked quinoa as a side dish there are plenty of ways to amp up the flavor.

How to Use Quinoa

Once you’ve cooked your quinoa there are SO many ways to use it! I love meal prepping quinoa and using it in a variety of ways throughout the week. Here are some of my favorites:

How to Cook Quinoa

5 from 3 votes
My go-to method for cooking quinoa so it’s perfectly cooked and fluffy. Use this quinoa in place of rice, for salads or as an easy side! 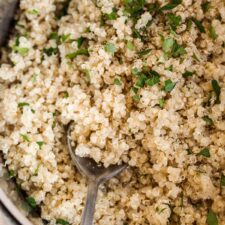