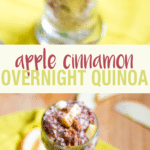 Turn leftover quinoa into a protein-packed breakfast with this simple apple cinnamon overnight quinoa recipe. It’s similar to overnight oats but made with quinoa and absolutely delicious!

Quinoa for breakfast?!? It’s a good thing, I promise! I’ve actually made quinoa overnight oats with quinoa flour before, but hadn’t ever tried making a version with plain quinoa.

I’ve thought about making overnight quinoa many times because we pretty much always have cooked quinoa in the fridge. The only reason I waited so long to try my hand at it is that I was a little worried that, unlike rolled oats, the cooked quinoa wouldn’t absorb much of the liquid and that I’d wake up to itty quinoa bits floating in almond milk. Although now that I think about it, that wouldn’t be a bad thing — just more like quinoa cereal and not what I was going for.

To make sure much of the almond milk did get absorbed I added some chia seeds and protein powder to the mix. They worked perfectly and also give the breakfast an added boost of nutrition. If you like chia seed pudding you’ll like overnight quinoa because the texture is very similar.

Is Quinoa Better Than Oatmeal?

If you’ve been reading EBF for a while, you already know that quinoa is one of my favorite grains (even though it’s actually a seed, I think of it as a grain). Not only is it high in protein, but the protein that it supplies is complete, meaning it includes all nine essential amino acids. Plus, it’s gluten free, which is perfect for those avoiding wheat and gluten.

I wouldn’t necessarily say it’s “better” than oatmeal because I think both grains are great! If I *had* to tell you what to eat, I’d tell you to eat a healthy mix of both.

This post is part of the Ancient Harvest Blogger Ambassador program. I receive free product and I am compensated for my work. As always, opinions are my own. Thank you for supporting the brands that make EBF possible.

No ratings yet
Turn leftover quinoa into a protein-packed breakfast with this simple apple cinnamon overnight quinoa recipe. It's similar to overnight oats but made with quinoa and absolutely delicious! 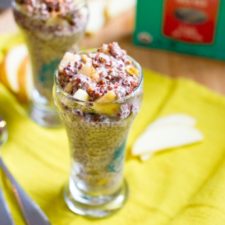