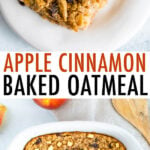 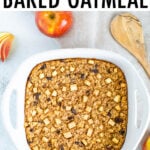 This apple cinnamon baked oatmeal is inspired by one of my favorite seasons: fall! I love visiting apple orchards and creating alllll the apple recipes. My ideal weekend would involve a cool, crisp morning, a cozy sweater and some sort of baked apple treat.

I’ve made a similar version before with steel cut oats, but this version is just as tasty and cooks up a bit faster. Here’s the baked steel cut oatmeal recipe, if you’re interested.

Pour the mixture into a prepared baking dish, top with a few extra apple slices and bake at 375ºF for about 40 minutes or until the center is set.

Yes, you can totally make baked oatmeal ahead of time, and that makes it perfect for meal prep! There are a couple of options that work really well.

4 from 202 votes
This apple cinnamon baked oatmeal is inspired by traditional Amish baked oatmeal and studded with apples, raisins and loads of cinnamon flavor. It’s the perfect fall breakfast and great for meal prep. 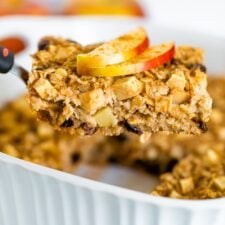