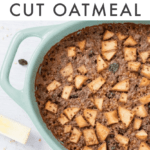 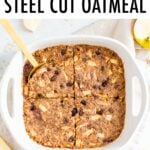 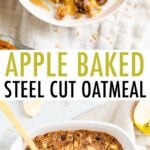 This apple baked steel cut oatmeal recipe is a lovely make-ahead breakfast option for busy mornings. Studded with sweet apple chunks, raisins and cinnamon, these oats will satisfy your taste-buds and keep you feeling full all morning.

I’ve been on a warm breakfast kick and my favorite as of late has been baked oatmeal. After making this maple pecan baked oatmeal Isaac requested a version without nuts so I started brainstorming. He loves raisins so I took that idea and ran with it.

The result was a baked oatmeal with apple chunks and plump raisins nestled throughout. Doesn’t it look pretty with all the apple bites and chia seeds on top?

The combo of oats, apples, raisins, a little maple syrup and a dash of cinnamon makes for a naturally sweet and delicious healthy oatmeal bake. This version is particularly nutritious, because I used steel cut oats. They’re the least processed of all oats and have an awesome chewy texture. They do take a bit longer to cook so this recipe does take about 20 minutes longer to bake than my apple cinnamon baked oatmeal with rolled oats.

Ingredients Needed for This Baked Oatmeal

How to Reheat Baked Oatmeal

Reheating the baked oatmeal is a breeze, either using the microwave, toaster oven or stove-top. Although I have to tell ya, I’ve found that the oats are really good eaten cold as well. I’ve been known to eat them straight from the fridge, but sometimes I’ll add an extra splash of almond milk and eat them like overnight oats or muesli. Yum!

If you’re a baked apple lover you will adore this baked oatmeal. Trust me on this one. The apples get extra sweet, soft and are coated with cinnamon. It reminds me of apple pie, which is perfection because apple pie is my fave.

Isaac absolutely loved this version and thought the sweetness was perfect. If you’re trying to cut back on sugar or just prefer things mildly sweetened, you can easily reduce the maple syrup and raisins a bit. It won’t affect the end result, the oats will just be a little less sweet. Enjoy!

5 from 62 votes
This apple cinnamon baked steel cut oatmeal recipe is a lovely make-ahead breakfast option for busy mornings. Studded with sweet apple chunks, raisins and cinnamon, these oats will satisfy your taste-buds and keep you feeling full all morning. 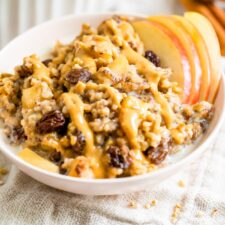