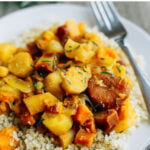 A slow simmered vegetable tagine with apricots and rosemary! Serve this vegetarian dish as a side or over couscous or rice for a complete meal. Vegan and gluten-free.

Fall has me going root vegetable crazy! Rutabaga, beets, parsnips, carrots, turnips, taters… I’ve been stocking up on all the root veggies lately.

Why Use Root Vegetables for Tagine?

Well, first and foremost most root vegetables are in season right now, but they’re also delicious and great source of complex carbs — full of antioxidants, fiber, essential vitamins and minerals. They also have a bit of sugar so they’re great for curbing a sweet-tooth craving. And according to ayurveda, root vegetables have a grounding energetic property so when we eat them we feel balanced, connected and less spacey.

So many reasons to load up on all the root vegetables this fall and winter!

I love roasted root vegetables! Roasting caramelizes their natural sugar and makes the exterior crisp while allowing the interior to become tender.

That said, I’m always looking for new ways to cook veggies and the preparation method I’m sharing today is a new one for me. It involves quickly braising the root vegetables on the stove-top, adding liquid and allowing them to bake until tender in a Dutch oven. This type of preparation is often called a tagine or tajine. I’ve ordered a tagine out at restaurants (specially Cafe Mogador in Brooklyn which makes an awesome tagine) but I’ve never made one at home… until this dish.

As I mentioned, you’ll need a Dutch oven that can go from the stove-top to the oven for this recipe. I used this oval ceramic Dutch oven. I really like this particular Dutch oven because it cooks evenly and has a natural non-stick finish. Most Dutch ovens are made of cast iron and are super HEAVY, but this one is very light. Another cool feature is the glass lid. It’s awesome for peaking in on your dish without removing the lid and releasing all the steam.

How to Cook and Serve Vegetable Tagine

Cooking this tagine in a Dutch oven for just under an hour gives the spices a chance to permeate the root veggies. At the end of the cooking time you’re left with tender veggies in a flavorful slightly sweet broth. You can serve the root vegetable tagine on its own as a side or over a whole grain like rice, cous cous or quinoa. If you’re looking for extra protein you can add some chickpeas to the mix or serve the dish with a side of lean protein like grilled salmon or chicken.

Truth be told I ate the root vegetable tagine over quinoa with canned tuna while Isaac added leftover bbq chicken. Sounds kind of strange, but both combos were delicious. I feel like the root veggies pair well with just about anything!

With the dried apricots, root veggies and maple syrup, this dish is a little on the sweet side, which I love. If you want to balance out the flavors a bit you can add a little spice with crushed red pepper or cayenne pepper.

If you try this root vegetable tagine please be sure to leave a comment and star rating below letting me know how it turned out for you. Your feedback is super helpful for the EBF team and EBF readers.

5 from 5 votes
A slow simmered root vegetable tagine with apricots and rosemary! Serve this vegetarian dish as a side or over rice or quinoa for a complete meal. Vegan and gluten-free. 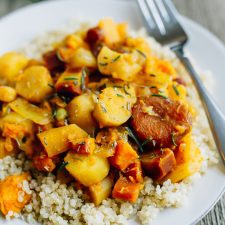 I used a variety of root vegetables for this tagine, but feel free to experiment with what you have available. If you can’t find rutabaga or turnips, simply add more parsnips, carrots or sweet potatoes.

This post is sponsored by Revol, a family owned company that has been making high quality porcelain products in France since 1768.Their products are sold through their website and at retailers like Sur La Table and Williams Sonoma.