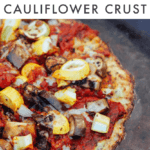 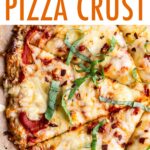 Love pizza, but want to keep it healthy? Make this low-carb cauliflower pizza crust. Only 6 ingredients and so easy!

You name it, cauliflower can do it!

That said, cauliflower pizza crust is arguably the most fun way to eat cauliflower! It’s obviously not the same texture or flavor as a traditional doughy pizza crust, but it’s so delicious! It’s crunchy around the edges, has a hint of roasted cauliflower flavor and tastes just like pizza.

There are two parts to this recipe – the crust and the toppings!

Here’s what you need for the cauliflower pizza crust:

Dairy-free – You can either use dairy-free mozzarella cheese or try omitting the cheese. I personally prefer this with cheese, but others have tested the recipe without cheese and it turned out just fine.

Vegan – If you want to skip the egg in the crust, you could try a vegan egg replacer or a flaxseed egg. I haven’t tried either, but it should work!

Toppings – You can top the pizza with whatever you like, just make sure the toppings are already cooked since you’ll only be broiling the pizza for a few minutes. Also keep in mind that the cauliflower pizza crust is less firm than most regular dough-based crusts so you don’t want to weigh it down with a ton of ingredients. Keep is simple.

How to Make Cauliflower Pizza Crust

Sauté cauliflower rice – In a nonstick skillet over medium heat, cook the riced cauliflower until translucent – about 6-8 minutes. This step is key and really helps to dry out the cauliflower.

Combine crust ingredients – In a large bowl, combine the cooked cauliflower with the garlic clove, shredded cheese, egg, dried basil and dried oregano. The cheese may melt a bit during this process, but that’s okay.

Make crust – Line a baking sheet or pizza stone with parchment paper and grease with olive oil. Spread the dough out evenly on the baking sheet and form into a circle. You’ll want it to be about 1/4 inch thick.

Bake crust – Bake at 400ºF for 25-30 minutes or until the crust is golden, crispy on the edges and cooked through the middle.

Add toppings – Remove the crust from the oven and set the oven temperature to broil. Top the crust with pizza sauce, cheese and any other toppings you’d like.

Broil – Broil the pizza for 5 minutes or until the toppings are hot and the cheese has melted. Allow the pizza to cool for 2-3 minutes before cutting and serving.

Can Pizza Be Healthy?

YES! 100%. If you cut this crust into 8 slices, each piece of crust (without toppings) has only 75 calories, 5 carbs and 5 grams of protein! There’s no need to feel guilty about eating a few slices… several times a week. Enjoy!

Be sure to check out all of the cauliflower recipes here at EBF!

5 from 90 votes
Love pizza, but want to keep it healthy? Make this low-carb cauliflower pizza crust. Only 6 ingredients and so easy! 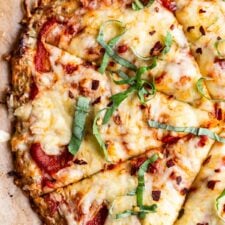