I think I’m about to make all the risotto lovers in the house really happy with this recipe.

I found a way to not only make risotto healthy, but also incredibility quick and easy using quinoa. This recipe is vegan so there’s no cheese or cream involved and you don’t have to sit in front of the pot stirring for days on end. And yet, you still end up with a creamy, carby bowl of deliciousness — packed with protein and lots of veggies, of course.

The soup is rich, non-dairy, gluten-free and contains a full serving of vegetables in each cup. There’s no GMOs or artificial flavors, chemicals or preservatives.

I buy Imagine products all the time (especially the broths and stocks) so when the company reached out to me about creating a recipe using one of their creamy soups I quickly said yes. They have a bunch of creamy soups to choose from, but I was immediately drawn to the mushroom soup because it reminds me of my childhood. Cream of mushroom soup (the not so good for you kind) was a pantry staple, used to make casseroles by my mom. I thought about recreating a healthy version of my mom’s broccoli cheese casserole using Imagine’s creamy mushroom soup but ultimately decided to try my hand at a quinoa risotto dish instead.

But don’t worry, there’s still plenty of time for me to recreate the broccoli cheese casserole… which now that I think about it, I should totally do soon because it’s an Easter dinner staple. I don’t know why I didn’t think about that until just now. Doh!

Anyhow, I’m glad I went with the risotto because it turned out to be so creamy and flavorful! The portobello soup brings a burst of mushroom flavor, as well as, a rich and creamy texture to the quinoa. The sautéed kale, mushrooms and onions boost the veggie factor while the nutritional yeast brings the cheesy component that risotto is known for. Topped off with a garish of fresh parsley and chives, this dish is absolutely delicious.

I like that it’s fast and can easily be considered a weeknight meal, but it’s also fancy and pretty enough to serve to friends for a dinner party.

Be sure to check out my guide for how to cook quinoa as well as all of the quinoa recipes here on EBF.

No ratings yet
Make risotto healthy and easy with this creamy quinoa risotto. Loaded with protein and veggies this “risotto” is dairy-free, vegan, gluten-free and utterly delicious! 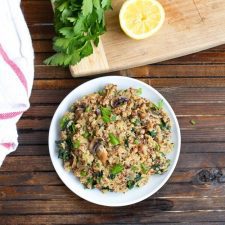