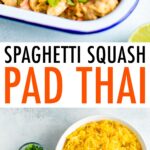 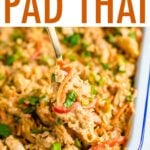 Pad Thai is probably one of the most well-known Thai dishes, but if you’re unfamiliar it’s traditionally a stir-fried noodle dish originating from Thailand. It’s typically made with rice noodles, but since I’m a spaghetti squash lover through and through, I had to try it with squash noodles instead. Authentic Pad Thai is made with a sauce that consists of fish sauce, vinegar, tamarind paste and sugar. For this untraditional Pad Thai we’re using a sweet chili almond sauce that doesn’t use fish sauce, but still has a ton of flavor and makes this dish absolutely delicious. 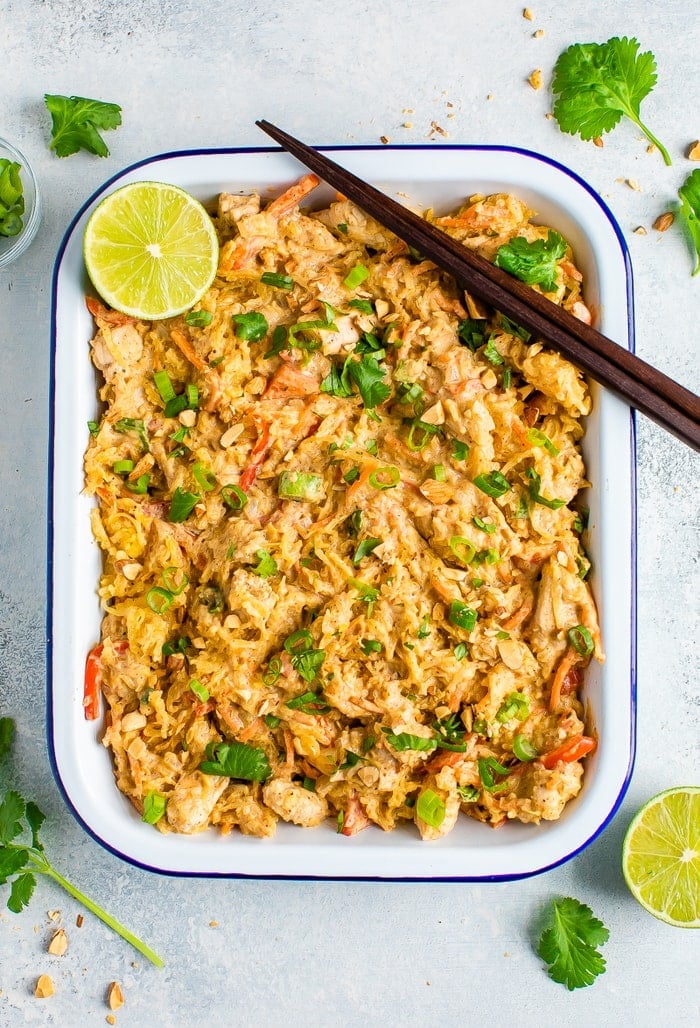 While I never want to imply that spaghetti squash noodles are exact healthy dupes for regular noodles, they are a really great substitute for this Pad Thai dish! I find that while the texture is super similar, spaghetti squash has a firmer texture than cooked noodles and of course, they are thinner than the traditional rice noodles used for Pad Thai. You will know you’re eating vegetables instead of rice noodles, but I love the extra texture in this dish!

Spaghetti squash has a hint of sweetness to it, but overall it’s pretty mild in taste so it takes on the flavors of the dish. In this case there are a lot of delicious flavors happening (especially from the almond sauce) so you don’t have to worry about it tasting bland. 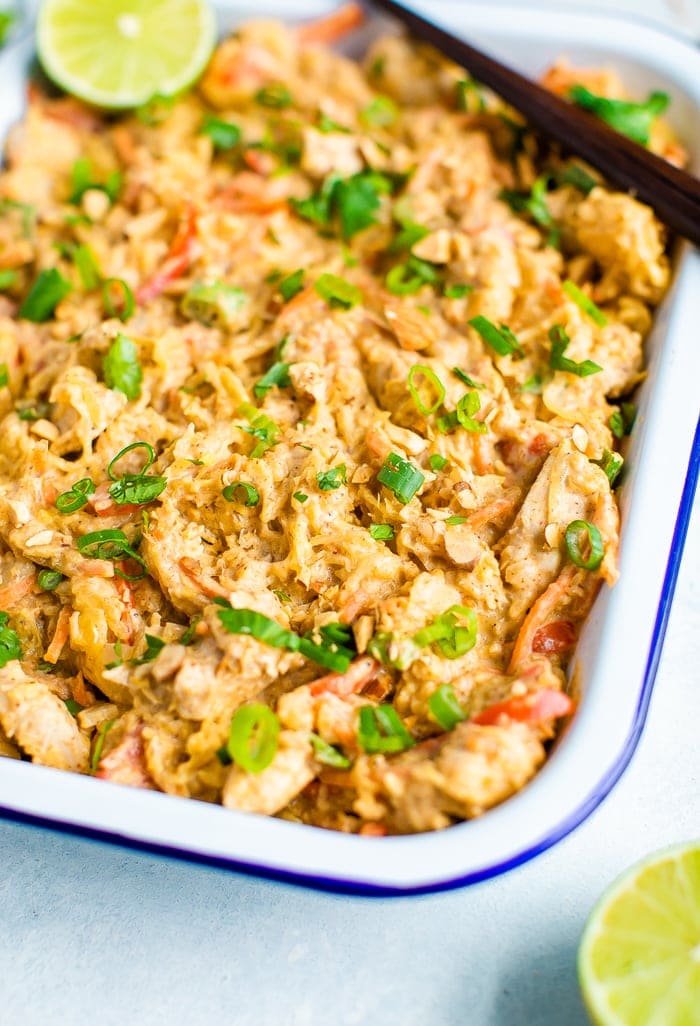 There are two main components of this recipe: the sauce and everything else. I’m obsessed with the chili almond sauce, which is inspired by my chili almond dressing. 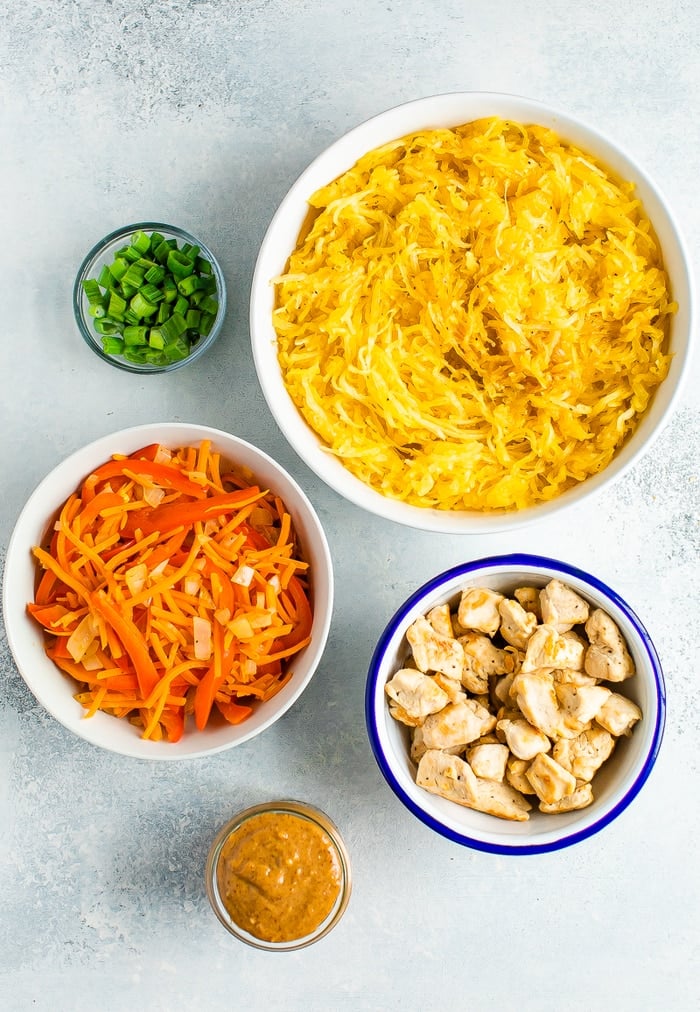 There are a lot of methods you could use to cook spaghetti squash, but my personal favorite is to cook it in rings. Check out my blog post for the full details, but the cliff notes are: you preheat your oven to 400º F and then cut your spaghetti squash into 1 1/2 inch thick rings. Gently scrape out the seeds in the middle of each ring, drizzle with olive oil, salt and pepper and bake for 30-40 minutes, flipping about 15 minutes in. You’ll be left with perfectly cooked spaghetti squash strands that are long and not watery at all.

After you cook the spaghetti squash and whip up the sauce in your food processor or blender, this recipe is straight forward – just lots of sautéing! First you’ll cook the chicken, then the veggies and then you mix everything together for serving. And if your sauté pan isn’t large enough, you can do the mixing in a large bowl.

Once everything is combined, simply serve with green onions, cilantro, lime and chopped almonds for garnish! 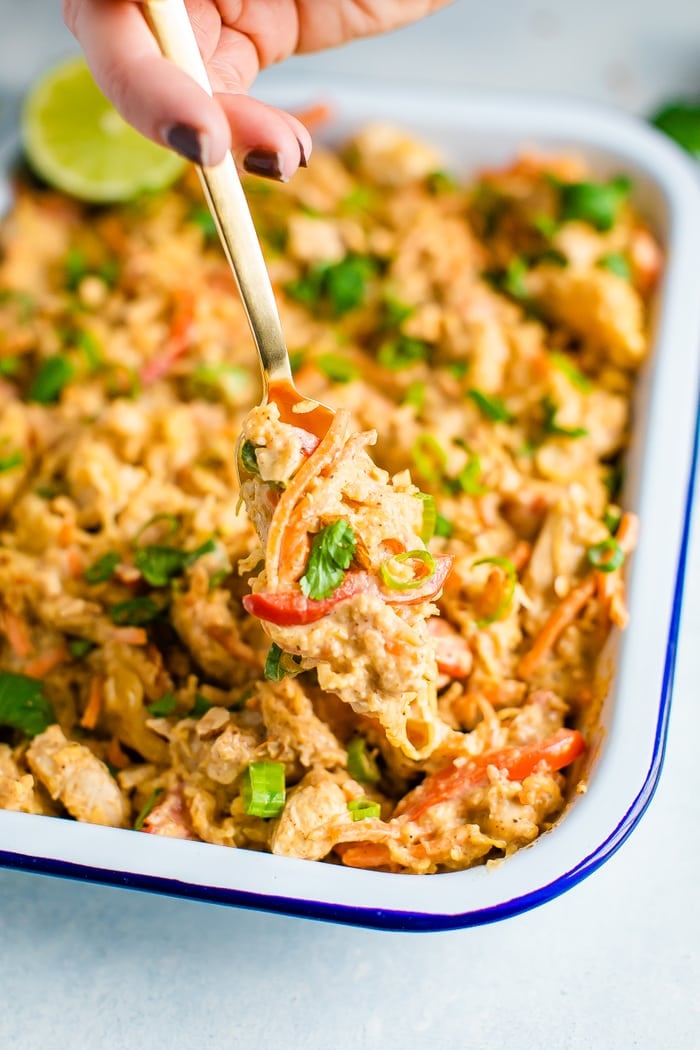 If you make this spaghetti squash Pad Thai, please be sure to leave a comment and star rating down below letting me know how it turned out. Your feedback is super helpful for the EBF team and other EBF readers. 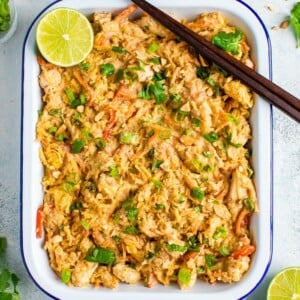 Serving: 1/4 of recipeCalories: 456kcalCarbohydrates: 27gProtein: 35gFat: 24gSaturated Fat: 2gPolyunsaturated Fat: 6gCholesterol: 36mgSodium: 607mgFiber: 8gSugar: 6g
Keyword spaghetti squash pad thai
Tried this recipe?Let us know how it was!
This post may include affiliate links. Thank you for your support.