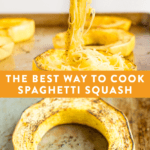 As I plan content for the year ahead, I really want Eating Bird Food to be a resource for you! Wondering how to prepare a certain ingredient? Have questions about why certain foods are considered healthy and others aren’t? Want to learn more about meal prepping? I want to be your go-to girl for all things healthy eating.

So in light of that, let’s talk all about spaghetti squash! You’ve probably seen it at the grocery store or pinned recipes with spaghetti squash on Pinterest, but have you ever made it? If not, get excited because I’m diving into all the nitty gritty details for you!

WATCH HOW TO COOK SPAGHETTI SQUASH:

Let’s back wayyy up… what the heck is spaghetti squash? It’s a yellow, oval shaped squash that is in season in the fall and winter months. When cooked, you can shred the insides into long, noodle-like strands. Hence the name: spaghetti squash. The texture is a tiny bit more fibrous than pasta, but makes a great substitute for regular spaghetti noodles.

Don’t hate me for this answer, but it doesn’t really have a ton of flavor. Although, I do think it has a little bit of sweetness to it. It is amazing as a sub for pasta because it lets whatever sauce you’re using shine. You can get crazy with your sauce flavorings and know that the spaghetti squash will truly be a base and not impart too much flavor.

How Do You Cut Spaghetti Squash?

First thing first, before you even get to the cooking part, you have to cut it. I’ll be honest and say I don’t love cutting spaghetti squash, but it’s so much easier if you have a large, sharp knife. We have a Shun chef’s knife that I love. Another option is to poke a couple small holes in the squash using a fork and then microwave the entire squash for about 5 minutes to soften the squash a bit and make the process a little easier. Go slow and be extra careful!

When it comes to which way to cut spaghetti squash there are two main ways — widthwise and lengthwise. I used to cut my squash lengthwise all the time until I realized that the squash’s strands run horizontally in circles around the inside of the squash and if you cut it widthwise into rings you get longer spaghetti strands. And the rings help reduce moisture as well so the spaghetti squash isn’t watery after it’s done roasting.

After cutting, spaghetti squash is really simple to cook! There are a few different methods you can use. 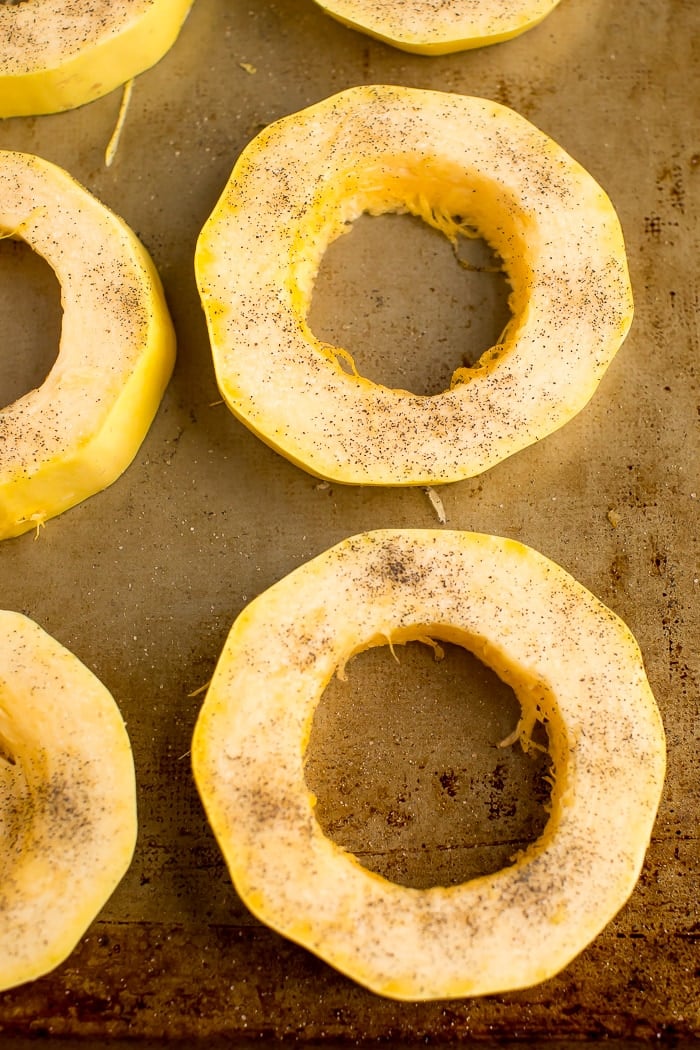 How to cook spaghetti squash

Slice your spaghetti squash in half, lengthwise or widthwise. Scoop out the seeds and place the cut side down in a microwave-safe dish. Fill the dish with about 1 inch of water. Microwave on high for 10-12 minutes or until you can press into the skin fairly easily. Remove and let cool for about 15 minutes and then use a fork to scrape out/shred the inner part, making “spaghetti noodles”.

Slice your spaghetti squash in half, lengthwise or widthwise. Scoop out the seeds. Place the steamer basket in the bottom of the Instant Pot and add 1 cup of water. Place the squash halves on top of the basket and secure the lid. Make sure the vent is turned to “sealed” and set the pressure cooker to 7 minutes on high pressure. Use the quick release when finished. Remove and let cool for about 15 minutes and then use a fork to scrape out/shred the inner part, making “spaghetti noodles”. See the full method for spaghetti squash in the Instant Pot here.

How to Freeze Spaghetti Squash:

Let the cooked squash cool completely before transferring the noodles to freezer-safe bags. To prevent the squash from freezer burn, you’ll want to squeeze as much air as possible out of the bags. The squash should keep for up to 7-8 months in the freezer. When you’re ready to use your squash you can transfer from the freezer to the fridge to thaw until you’re ready to reheat, but if you don’t have time to thaw the squash, that’s okay — frozen spaghetti squash can be reheated quickly in the microwave, a steamer basket or even sautéed on the stovetop.

Spaghetti squash is low in calories, containing only 42 calories in one cup cooked. It also contains a small amount of carbohydrates, 10 grams, and a good amount of fiber, 2.2 grams or 9 percent of your daily needs. When substituting spaghetti squash for pasta you can save about 170 calories and 30 grams of carbs in a one cup serving!

5 from 55 votes
A simple recipe for cooking spaghetti squash if you want long pasta-like strands and spaghetti squash that isn't watery! Just cut the squash widthwise, into rings and roast it. 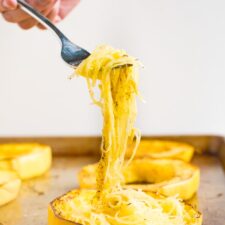