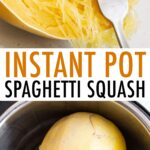 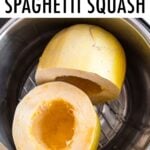 Here’s how to make perfect spaghetti squash in the Instant Pot every time! It’s so easy and only needs to cook for about 8 minutes.

I know I’m late to the game, but I recently invested in an Instant Pot and I am fully obsessed! I’ve been testing so many recipes in it and recently tried spaghetti squash…

Although I still think my ring-method is the my best way to cook spaghetti squash, I’ve been getting questions for how to cook it in the Instant Pot so I tested it for you.

The result?! You can make spaghetti squash noodles in the Instant Pot in no time at all and there’s less chopping involved too!

Let’s start at the beginning… what the heck is spaghetti squash? It’s a yellow, oval shaped squash that is in season in the fall and winter months.

When cooked, you can shred the insides into long, noodle-like strands. Hence the name: spaghetti squash. The texture is a tiny bit more fibrous than pasta, but makes a great low carb, fiber-rich substitute for regular spaghetti noodles.

Yes, spaghetti squash is super healthy! It’s low in calories, containing only 42 calories in one cup cooked. It also contains a small amount of carbohydrates, 10 grams, and a good amount of fiber, 2.2 grams or 9 percent of your daily needs.

When substituting spaghetti squash for pasta you can save about 170 calories and 30 grams of carbs in a one cup serving!

It’s a great spaghetti substitute when you’re looking for a grain-free option, but I also love batch cooking spaghetti squash to have on hand for weekly salads and bowls. This pesto spaghetti squash salad is sooo yummy!

Spaghetti squash doesn’t really have a ton of flavor! Although, I do think it has a little bit of sweetness to it. It is amazing as a sub for pasta because it lets whatever sauce you’re using shine. You can get crazy with your sauce flavorings and know that the spaghetti squash will truly be a base and not impart too much flavor.

How to Make Spaghetti Squash in the Instant Pot

Prep squash – Use a sharp knife to cut the spaghetti squash in half widthwise. Be sure to do it widthwise… this is my trick for getting longer strands and it fits in the Instant Pot better when cut this way too.

Scrape the seeds out from each half of the squash with a spoon.

Pressure cook – Place the trivet into the Instant Pot along with 1 cup of cold water. Place the spaghetti squash halves on the steamer rack and close the lid. Make sure the steamer valve is closed and then cook on high pressure for 6 minutes for al dente noodles or 8 minutes for softer noodles.

Quick release – After the noodles are done cooking, quick release the pressure by using a towel or tongs to open the steam valve. Be careful so you don’t burn yourself while opening the valve! When the pressure is released, open the lid carefully.

Serve – Carefully remove the spaghetti squash from the Instant Pot and pull the flesh away from the skin with a fork to create long spaghetti-like strands. Serve the squash with your favorite sauce or use in a recipe that calls for cooked spaghetti squash.

How to Store Spaghetti Squash

Spaghetti squash is great for meal prep. It will last 3-5 days in the fridge in an airtight container or wrapped in plastic wrap.

Or you can freeze it!

To freeze, let the cooked squash cool completely before transferring the noodles to freezer-safe bags.

To prevent the squash from freezer burn, you’ll want to squeeze as much air as possible out of the bags. The squash should keep for up to 7-8 months in the freezer.

When you’re ready to use your squash you can transfer from the freezer to the fridge to thaw until you’re ready to reheat, but if you don’t have time to thaw the squash, that’s okay — frozen spaghetti squash can be reheated quickly in the microwave, a steamer basket or even sautéed on the stovetop.

If you try this Instant Pot Spaghetti Squash be sure to leave a comment and star rating below letting us know how it turned out for you. Your feedback is so helpful for the EBF team and our readers!

4 from 10 votes
Here's how to make perfect spaghetti squash in the Instant Pot every time! It's so easy and only needs to cook for about 8 minutes. 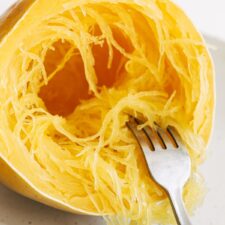