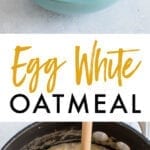 Add protein to your oats by stirring in egg whites while they cook. The end result is a bowl of thick, fluffy and filling egg white oatmeal.

Are any of these ideas new to you? Have you tried any out already?

When I say “egg whites”, I’m referring to the thick, clear liquid when you crack open an egg. The yellow part of the egg is the yolk. It’s fairly simple to separate the two out – I crack the egg in half over a small bowl and then pass the yolk back and forth between the two shell halves. The yolk will stay in the shells and the white will separate out into the bowl.

If you don’t want to crack a bunch of eggs and separate the whites from the yolks, you can also buy egg whites in a carton at the grocery store. I usually always have a carton of organic egg whites in my fridge because I use them for so many things including egg white oatmeal, my egg and oat combo bowl and these protein pancakes.

Egg whites are high in protein and low in calories. According to Healthline, 67% of the protein found in eggs is found in the egg whites. This doesn’t make them better or worse than the egg yolk (the yolks have a lot of great nutrition too!), but if you want a high protein, low-calorie meal, egg whites are your friend.

Of course, if you prefer to use whole eggs for this recipe, you totally can. I would sub 1-2 whole eggs for the 1/4 cup of egg whites. Just whisk them in small bowl and follow the recipe normally, adding the whisked egg(s) when you’re instructed to add the egg whites.

As mentioned in the previous high-protein oatmeal posts, oatmeal on its own doesn’t have much protein. This is why you are usually hungry a couple of hours after a bowl of plain oats. Not anymore! When you add protein (and healthy fats) to your breakfast, you’ll stay full and satisfied much longer. You can also add egg whites to baked oatmeal to increase the protein! Mix egg whites into your usual baked oatmeal mixture and bake as usual.

Adding egg whites to your oatmeal works best with hot oats. Don’t stir in egg whites into your overnight oats unless you plan to cook them the next morning! For stovetop egg white oatmeal you’ll start by cooking your oats with the liquid until all of the liquid has been absorbed. Whisk in the egg whites and stir constantly. The whisking is key and will keep the eggs from scrambling and create thick and fluffy oats. The voluminous texture of egg white oatmeal makes it my favorite high-protein oatmeal option. It’s perfect for volume eaters who love sitting down to a big bowl of oatmeal.

Be sure to check out all of my egg white recipes and all of the popular breakfast recipes here on EBF.

4 from 131 votes
Add protein to your oatmeal by adding egg whites. The end result is a bowl of thick, fluffy and filling oatmeal.