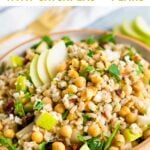 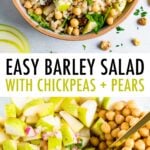 This healthy barley salad is packed with chickpeas, walnuts, sun dried tomatoes, parsley and crunchy pears. It’s such a flavorful combo and is perfect for meal prep and potlucks.

When it comes to grain-based salads I tend to gravitate towards rice salad and quinoa salad (not technically a grain, but I think of it as one). That said, I recently started using barley to make a grain-based salad and it might just be my new fave!

The barley salad I’m sharing today is loaded with so many delicious (and healthy) ingredients. In addition to the barley, there are chickpeas, toasted walnuts, tangy feta and arugula, so it kind of has a Mediterranean vibe. I’ve also added pears in there for a bit of sweetness. Everything is tossed in an apple cider vinegar dressing which definitely takes this salad to another level. Truth be told, the first time I made it, I ate it for breakfast and lunch the next day… I couldn’t get enough!

The reason I love grain-based salads is because they are  so filling … in the right way! You still get all the benefits of the fruits and veggies packed in the salad, but you also get more volume with the grains. As a volume eater, I love eating meals that satisfy me without leaving me feeling bloated or heavy, and this salad does just that.

There are two different types of barley (hulled and pearl). For this salad we’re using pearl barley. It’s a bit more processed, but it’s easier to find at grocery stores and it also cooks faster than hulled.

In general, barley is cooked similarly to farro. You add the grains and water (or stock) to a saucepan, bring to a boil and then cover and lower to a simmer. If you use pearl barley, it will cook quicker (about 25 minutes) than hulled barley (about 40 minutes). You’ll know the barley is done when it has increased in size and is soft and chewy. You can add more water as it cooks if needed. Feel free to cook to your desired texture! You can either let the barley absorb all of the water in the pot or drain out the excess.

When cooking barley for a salad I like to rinse the barley with cold water right after it’s done cooking. This cools it off, rinses away the released starch and keeps it from continuing to cook. The starch it releases into the cooking liquid makes it a great thickener for soups or even barley risotto.

I don’t feel like barley gets as much love as other grains, but it should. It’s a versatile whole grain and a great source of soluble fiber that can help lower cholesterol and control blood sugar. It also has important vitamins and minerals like manganese, selenium, thiamine and magnesium. Barley also contains antioxidants which help prevent and repair cell damage. (Source)

I’ve added pears to this salad for a hint of sweetness and slight crunch. I love pears when they’re in season! Besides being delicious, they are packed with important nutrients like fiber. One pear contains 6 grams of fiber, 21% of the daily recommended intake. They’re also high in folate, vitamin C, potassium and antioxidants. Because most of the fiber and antioxidants are in the skin, try to leave the skin on your pears to get the most out of the fruit!

I also make a vinaigrette dressing that I highly recommend pairing with this salad! For the dressing you need red onion, apple cider vinegar, olive oil, maple syrup, Dijon mustard, dried oregano, salt and pepper. So simple and so delicious!

The great thing about this salad is that you can fully prep it in advance because the ingredients hold up well with the dressing and won’t get soggy. This makes it great to meal prep for the week, but it’s also perfect for potlucks and cookouts.

You can absolutely customize this salad based on your personal preference or what’s available to you at the time. If pears aren’t in season, apples would make a great substitute. Don’t have chickpeas? Use a different bean. Only have spinach on hand? That is the perfect swap for arugula! Don’t have barley? Use a different grain! I think brown rice or farro would also be delicious in this salad. Let me know in the comments if you try any of these swaps.

Be sure to check out all of the pear recipes as well as the full collection of smoothie recipes on EBF!

Barley Salad with Chickpeas and Pears

5 from 24 votes
This hearty barley salad is packed with chickpeas, walnuts, crunchy pears, sun dried tomatoes and parsley. It’s such a flavorful combo and is perfect for meal prep and potlucks. 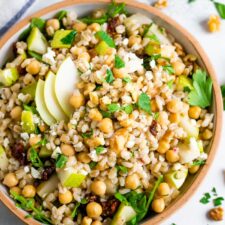