Okay, I’m going to come right out and admit something I’m kind of embarrassed about… cooking with dried peppers has always intimated me. I used to walk past them in the store and think, what the heck do people do with those things? This is naive, but I honestly thought that all dried peppers were super spicy and I had no clue how I could use them in my cooking. 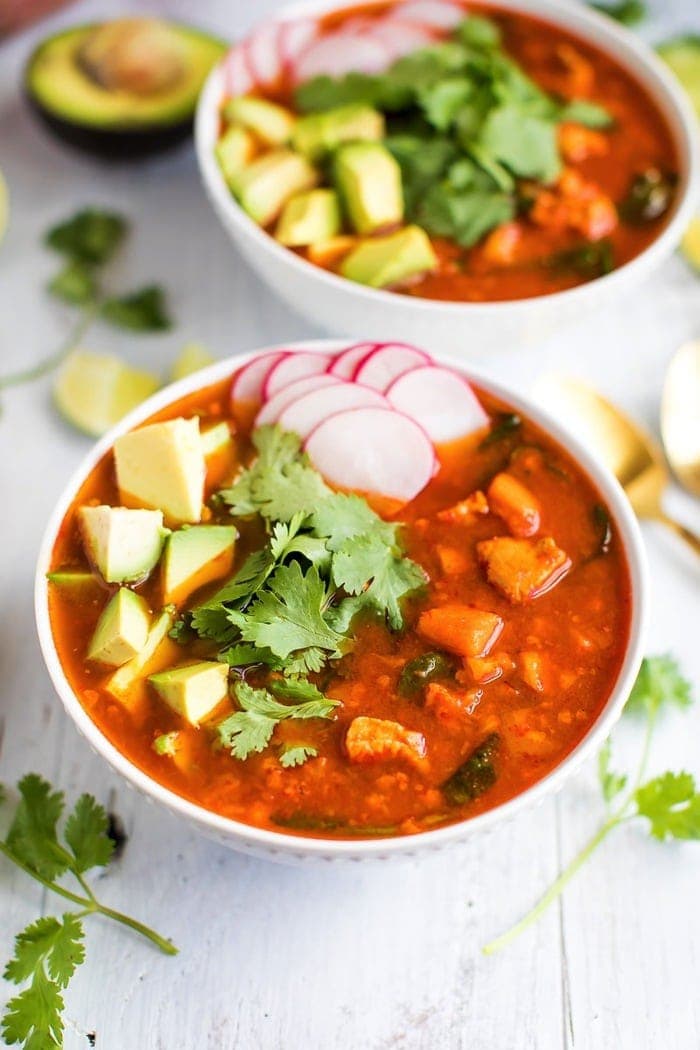 It wasn’t until I attended a cooking demo during a yoga retreat at the Veritas Farmhouse where the chef used dried guajillo Mexican peppers in a creamy sweet potato soup that I realized they’re actually pretty easy to work with and they’re awesome for adding a unique depth of flavor and spice.

I’d never heard of guajillo Mexican peppers before, but I quickly learned that they are one of the most popular chiles used in Mexican cuisine. They’re a little on the sweeter side with a hint of tang (similar to a cranberry) and a mild smokiness. I wouldn’t consider these peppers spicy so if you’re not a huge fan of spicy foods this would likely be a good pepper to test out.

After trying the amazing soup at the retreat I decided it was officially time to conquer my unnecessary fear of cooking with dried peppers at home and ordered a bag of guajillo Mexican peppers. I remade the creamy sweet potato soup that we had at the retreat, which is thick, rich and oh so creamy.

We enjoyed it, but I wanted to experiment with making a chunky soup with more veggies and protein so that it could be eaten as a meal. And that’s how this Mexican sweet potato soup with cauliflower, spinach and chicken came to be. 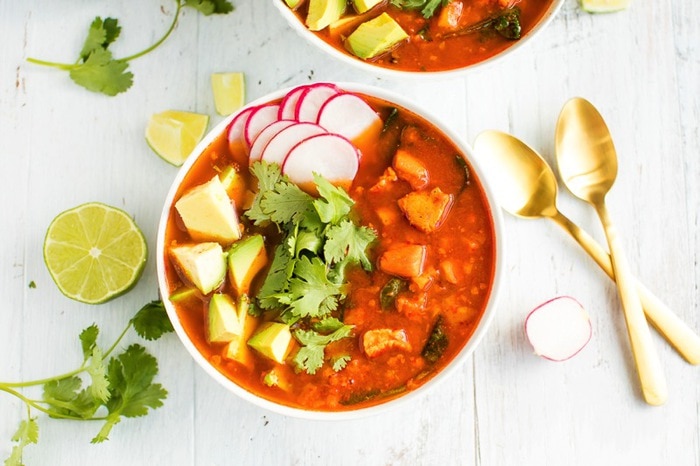 If you’re like me and haven’t really experimented with dried peppers before I highly recommend grabbing a bag and hopping to it. They’re such a great way to add a ton of flavor and spice to a dish without adding a ton of extra calories! Plus, despite their burning taste, chili peppers have long been considered a healthy spice. They are very high in antioxidant carotenoids and rich in various vitamins and minerals (Vitamin C, Vitamin B6, Potassium and Vitamin A). Studies have even shown that chili peppers can help with pain relief and promote weight loss by reducing appetite and increasing fat burning. (Source) 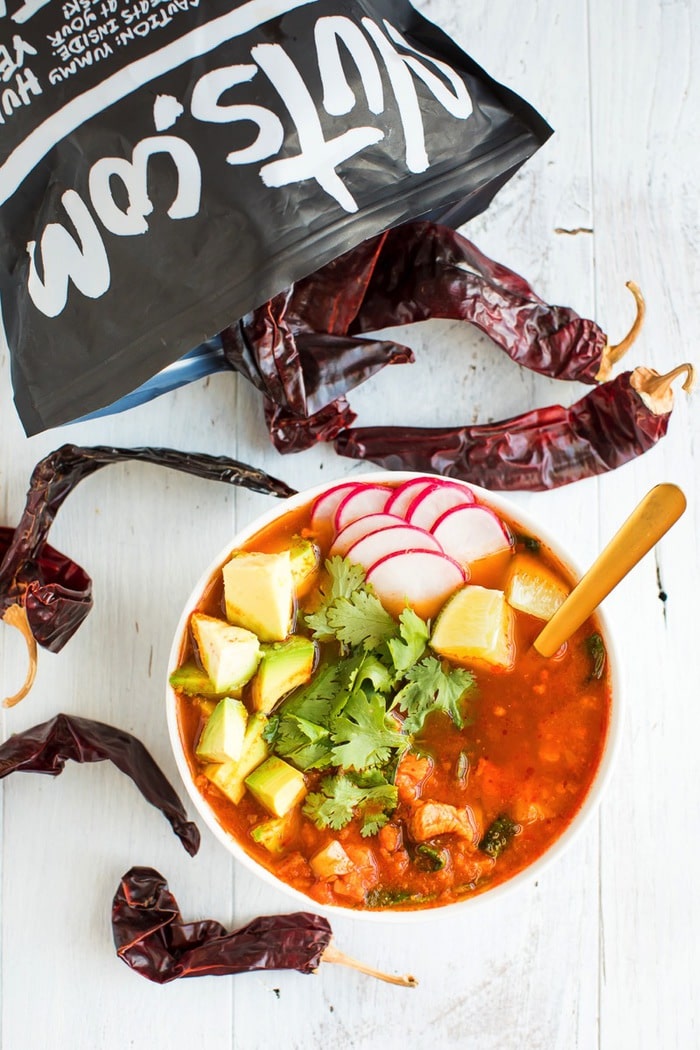 Rehydrate peppers – Remove the stems and dump out all the seeds from inside the peppers. Place the peppers in a saucepan with water, bring to a boil and simmer for about 10 minutes or until they’ve softened. That’s it! At this point they’re rehydrated and ready to be used!

Simmer – Add oil to a large saucepan on medium heat. Add chili pepper purée into the pan and reduce heat to medium-low. Cook, uncovered, stirring frequently, until thickened, about 10 minutes. Add broth, seasoned chicken cubes, sweet potato and cauliflower into the saucepan. Cover and simmer until chicken is tender and cooked through and sweet potatoes are fully cooked, this should take about 10-15 minutes. Stir in baby spinach until wilted and season with additional salt, if needed.

Serve – Portion soup into bowls and top with toppings of choice. I love serving mine with avocado, sliced radishes, cilantro and a lime wedge for squeezing over the top. 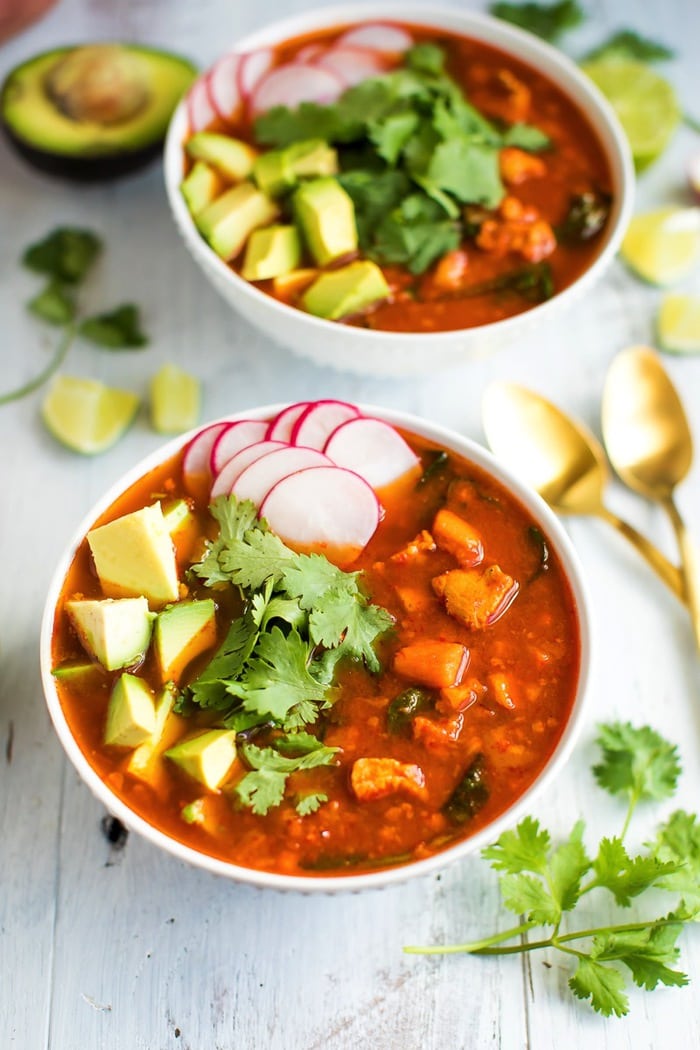 How to Serve Soup

This soup is a hearty enough recipe to be a meal in one! Having said, I love eating it with my pumpkin cornbread muffins. It’s also delicious served with bread, crackers (I love my almond crackers) or even tortilla chips. It can also be served with a salad… I have a ton of salad recipes to choose from, but something light and fresh like this garlicky kale salad would be perfect.

If you make this sweet potato chicken soup be sure to leave a comment and star rating below letting me know how it turned out for you. Your feedback is so helpful for the EBF team and our readers!

Recipe adapted and inspired by this Mexican Spice Chile Soup.

This post is sponsored by nuts.com, but as always opinions are my own. Thank you for supporting brands that make EBF possible. 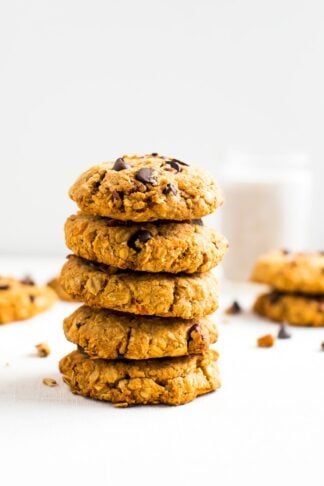 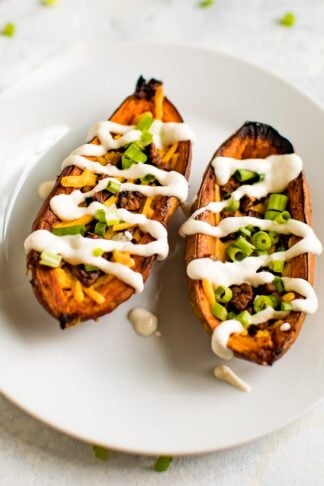 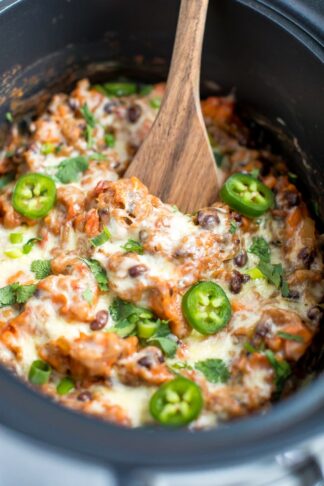 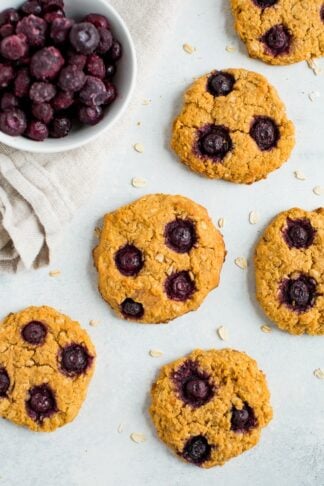