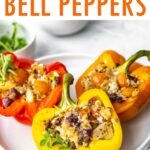 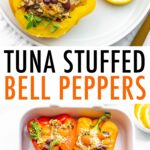 These stuffed peppers are so simple to make, amazingly flavorful and perfect for a quick healthy weeknight meal. The tuna mixture has a richness to it from the olives, oil and cottage cheese but it’s super healthy: one serving (2 stuffed pepper halves) has only 239 calories, 24 grams of protein, 18 grams of carbs and 9 grams of fat.

With stats like that, this tasty recipe is definitely a keeper. I’m excited to have another recipe to add to my weeknight meal rotation.

Broil peppers: I like to broil the peppers before stuffing and baking them because I prefer my peppers to be roasted and soft rather than raw and crunchy. If you’d prefer crunchy peppers, feel free to skip the broiling step!

Bake peppers: Place whole peppers on a baking sheet or baking stone and broil for 5-7 minutes, turning once halfway through broiling. Watch the peppers carefully so they don’t completely char. Remove from the heat and set aside to cool.

Make tuna filling: While the peppers cool, make the tuna filling. Sauté the onions and mushrooms in a skillet until soft and fragrant. Season with salt and pepper while cooking. Add the onion mixture to a medium size mixing bowl.

Combine ingredients: Add the tuna, tomatoes, olives, cottage cheese, lemon juice, olive oil, mustard, parsley and oregano to the bowl with the onion mixture. Break apart the tuna with a fork and stir all ingredients together. Season to taste with crushed red pepper and black pepper. The mixture shouldn’t need any additional salt.

Stuff peppers and bake: When your peppers are cool enough to handle, cut the peppers in half and remove the seeds and membranes. Lay the pepper halves on your baking sheet and fill with the tuna mixture. Bake for 10-15 minutes until warmed through. Serve immediately!

There should be just enough tuna mixture to fill your 4 pepper halves but if you have any leftover it’s delicious on it’s own!

Let the peppers cool slightly and either cover your baking dish or transfer peppers to an airtight container. Store in the fridge for up to five days. When you’re ready to reheat, I recommend heating in a toaster oven or conventional oven as opposed to a microwave. 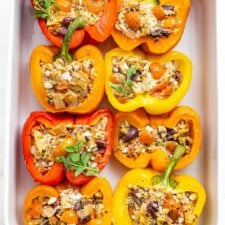