Hanukkah is here! Isaac and I celebrated on Sunday, the first night, with his family — munching on latkes, spinning dreidels, lighting the menorahs (Isaac’s mom has quite the collection) and exchanging gifts. Isaac and I light our menorah and exchange gifts throughout Hanukkah at our place, but getting together with his family to celebrate is always the highlight of the holiday. We have a lot of fun!

Isaac’s mom is the ultimate latke maker so there’s never been a need for me to make latkes during Hanukkah, but this year I decided I wanted to try making a healthier version — baked instead of fried with spiralized veggie noodles.

I was actually spiralizing sweet potato noodles for another recipe (coming soon!) when I thought of the idea to use the noodles to make latkes.

I used the C Blade on the Inspiralizer for the noodles, but if you have a different spiralizer just make sure your noodles are on the thinner side.

I seasoned the noodles few simple ingredients and added eggs to help bind everything together. I found that I didn’t need any flour, but if you feel like you need some I’d recommend using almond flour. The mixture does get a little wet towards the bottom of the bowl, but I think that’s normal and it didn’t bother me. I just squeezed out any extra liquid and tossed it once all the noodles were formed into latkes.

Here are the latkes pre-baking. Aren’t they cute?

As it turns out, spiralized noodles make perfect little nests (pancakes) and bake up quite nicely! They even get a little crispy like traditional latkes.

They’re also really flavorful. Sometimes fried things just taste like crispy fried things without much flavor, but because these latkes are baked instead of fried, you can really taste the sweet potato, parsnip and seasonings.

I love how bright and colorful they are as well!

Isaac and both really enjoyed these so I brought a batch to Isaac’s parents house on Sunday night to share — that way we all could have a few fried latkes as well as some of these. It’s all about balance, right. Especially this time of year! 🙂

No ratings yet
Baked spiralized latkes with sweet potatoes and parsnips make a flavorful and healthy twist on regular potato latkes. 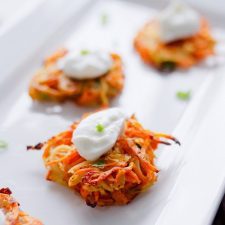