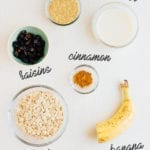 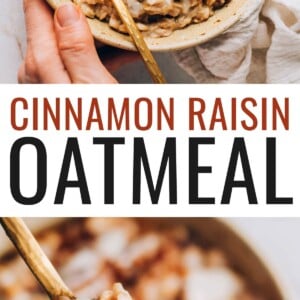 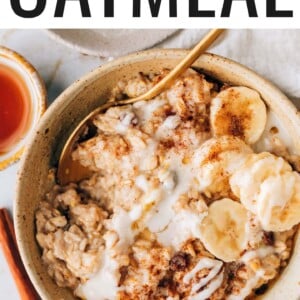 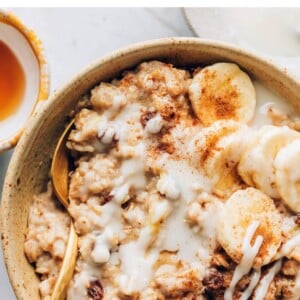 A tried and true favorite, this cinnamon raisin oatmeal is absolutely delicious and comes together in less than 10 minutes. It’s loaded with tons of cinnamon goodness and tastes just like an oatmeal raisin cookie. Vegan + gluten-free.

This cinnamon raisin oatmeal recipe is an EBF original and has stood the test of time. I used to make it ALL THE TIME as it was my go-to breakfast for quite a few years and it’s still just as delicious as I remember!

Toppings – This oatmeal has a delicious base recipe that you can build your own flavors on – but the toppings change depending on what I have on hand. This time around I used maple syrup, banana slices, raisins, coconut butter and a dash of cinnamon, but feel free to get creative with the toppings! If you really want to stick with the cinnamon raisin theme, my cinnamon raisin almond butter would be a delicious addition instead of the coconut butter.

Overnight Oats – You could use these ingredients to make a delicious overnight oats recipe if that’s more your style.

How to Make Cinnamon Raisin Oatmeal

Making this cinnamon raisin oatmeal is a breeze. Start by combining the oats, banana slices, raisin, flaxseed, cinnamon, sea salt and water to a pot and stir to combine. Heat over medium-high heat for 8-10 minutes or until all of the liquid has been absorbed. Stir the oats several times during cooking to make sure the banana slices melt into the oats. The oatmeal is cooked when the liquid is absorbed and the oats are thick and fluffy! Spoon the oats into a bowl and top with coconut butter, maple syrup, banana slices and a sprinkle of cinnamon.

This recipe is for a single serving but you can double, triple or more if you’re cooking for a crowd!

Be sure to check out all of the oatmeal recipes here on EBF!

5 from 9 votes
A tried and true favorite, this cinnamon raisin oatmeal is super easy to make and oh so delicious. Plus it takes less than 10 minutes to whip up. It’s time to ditch those instant oatmeal packets! 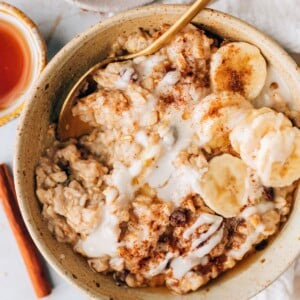